It was still beautifully warm here on Wednesday, but turned depressingly cold and windy today - cold in a way that's just too painfully familiar. Trees, however, are getting greener every day - or even every hour - and that sort of makes me optimistic: 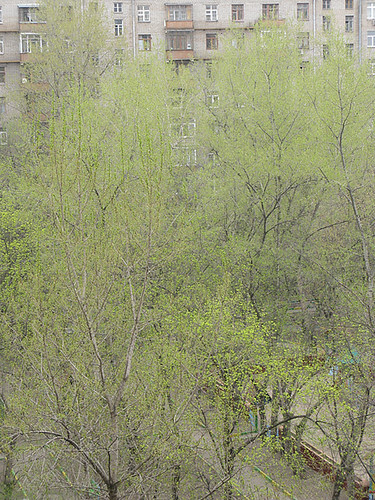 It's beautifully warm here, and the long-awaited season change is making me terribly lazy.

Here's a picture of the Yellow Building of the Kyiv Shevchenko University, my alma mater - one of them, that is - taken during my last trip to Kyiv, on Feb. 28: 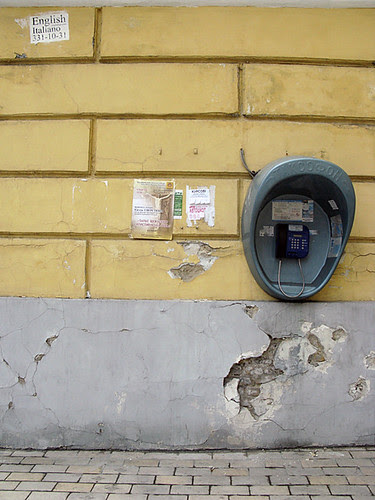 And a close-up - a lecture on Taras Shevchenko and the Christian Faith; term papers for sale; driving classes: 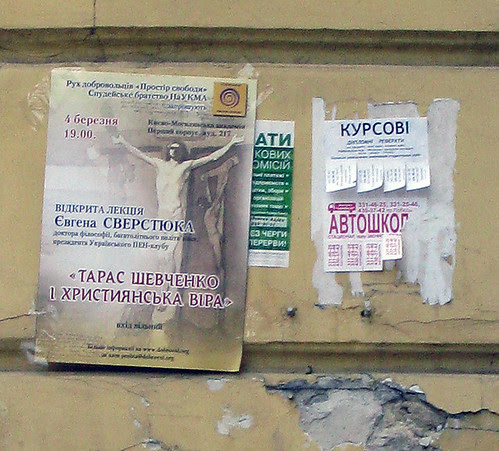 UPDATE: An English translation of Roman Gruzov's text is here (a huge thanks for this to Fëanor of Just A Mon).

A beautiful text (RUS) in Bolshoi Gorod, by the wonderful Roman Gruzov - about Baymurat aka Jimmy, an ethnic Uzbek from Tajikistan, a gastarbeiter in a town near Moscow - and a YouTube celebrity.

Here's one of the initial YouTube videos of Baymurat/Jimmy's rendition of a Bollywood song:

And here's his performance at Asian Dub Foundation's St. Pete gig on April 4:

I've been to Sinead O'Connor's concert today, and I'm still too overwhelmed by the experience. One of her songs had been going through my head all day today - the one that she ended up not playing, unfortunately: Feel So Different. I even sang it to Marta a few times during our walk. And now I'm still hearing her voice. I've always wondered what it would feel like to see her live - I imagined it as some sort of a divine presence thing. It felt and still feels more like a date, though. Wonderful. And fragile, because she's not what she used to be. No longer wild. Mother of four kids. Soft. But the voice is still the same. Nineteen years ago, in Tallinn, I listened to her for the first time, then copied all the lyrics from her second album into a notebook - and spent the next few months just reading them, until my father brought me two tapes of her from Krakow. It is overwhelming to realize that I've finally made it to her concert. I feel so happy. I now need to see Tori Amos live, too, but I'd like to postpone that for as long as possible - because when I do see her, I'll probably feel fully grown up then, with two of my teenage dreams that I still feel as strongly about a reality - and that's scary. 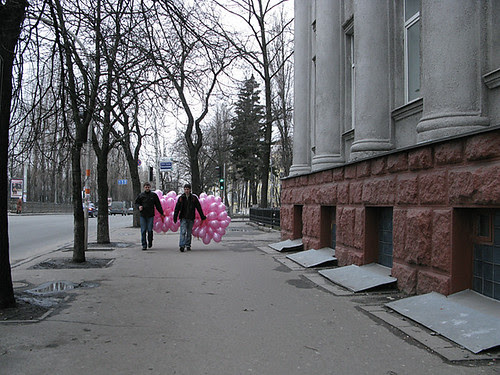 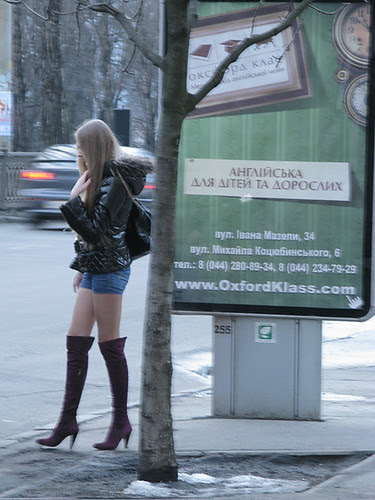 (Two months later, winter is about to end here in Moscow as well, they say. We'll see.)
1 comment:

Snow on April 19 here in Moscow. Not a single leave on any of the trees yet. Three or four relatively warm days last week, and that's it. All three of us are recovering from yet another cold. Half a year of winter. In Kyiv, apricots are almost done blooming by now.

As I wrote in my previous post, there were pine needles in the wild garlic brought here from Grozny last month. And in the Moldovan wild garlic that I bought last week, I found these beautiful tiny flowers - and they basically begged me to put them into water instead of into the salad: 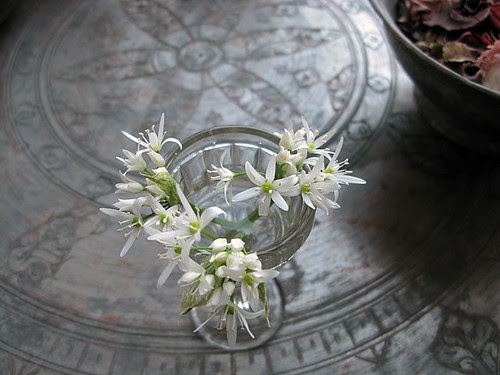 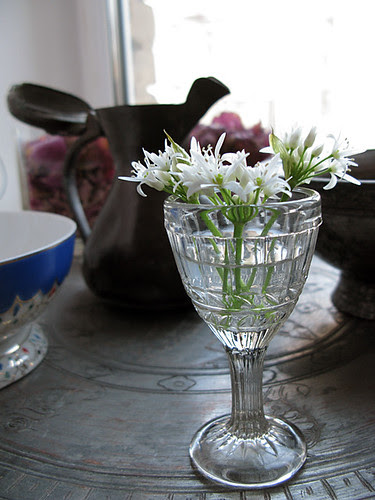 A month or so ago, I bought wild garlic at the market here in Moscow - lovely stuff. I was assuming they were growing it in some greenhouse outside Moscow, until I found a few pine needles as I was washing it, which made me realize it had come from an actual forest - way cool. I was meaning to ask the vendor about the origins of the herb, but kept forgetting.

A few days ago, I was buying wild garlic again, and did remember to ask: the current supplies that they have are from Moldova; what I bought last month came from Grozny, Chechnya.

I can't wait to ask where that delicious chestnut honey comes from.

Marta's favorite Uzbek bread is baked in a tandoor by a red-haired ethnic Uzbek from Tajikistan.

And here's a related post that I wrote four years ago:

At a new deli nearby they are selling lamb from NEW ZEALAND... "Yes, there's no lamb in Russia," they told me...

A sweet and beautiful vegetable vendor at the market nearby is from Daghestan; her name is Serenada...

At that time, I was buying most of my fruit and veggies from a middle-aged man named Ali - an ethnic Talysh from Azerbaijan. That market - just off Bolshaya Bronnaya Street - is no longer there: replaced by some large-scale construction now, I guess.
5 comments:

As promised, my daily links have a new home now: 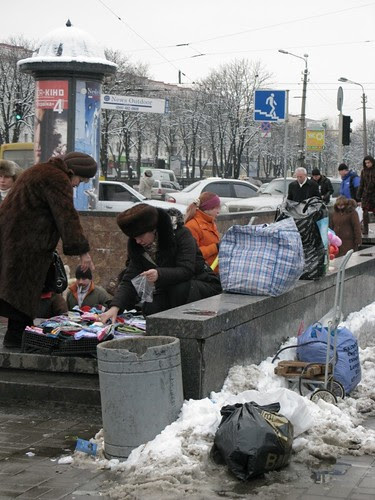 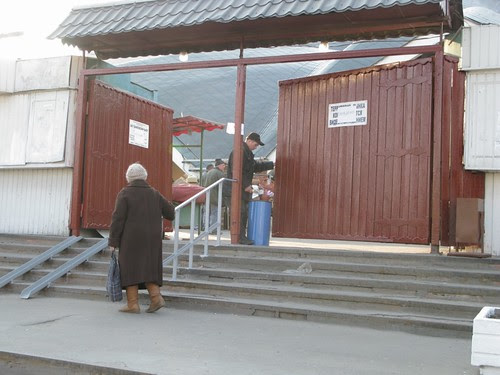 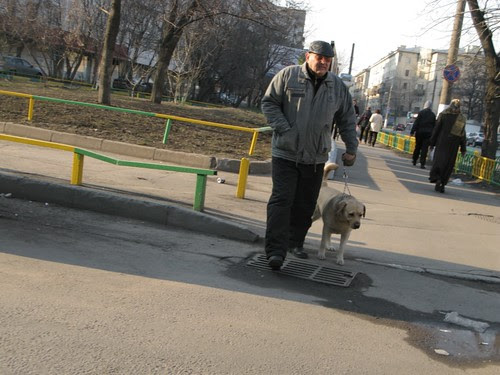 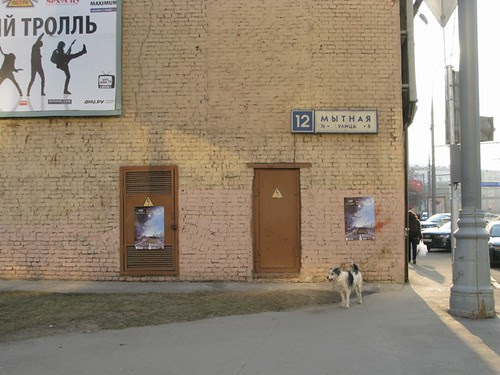 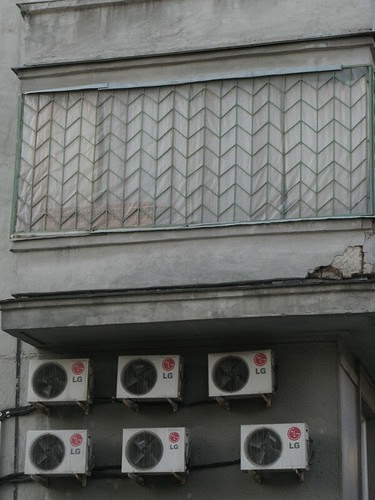 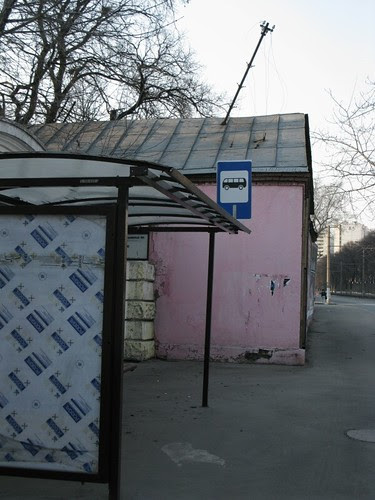 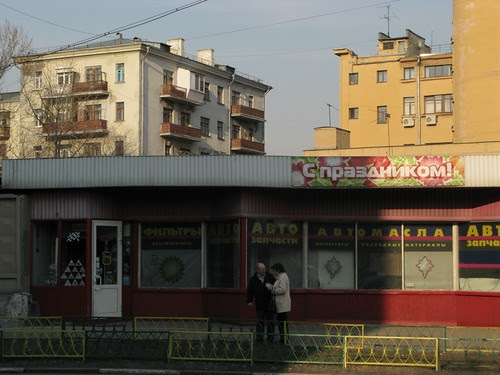 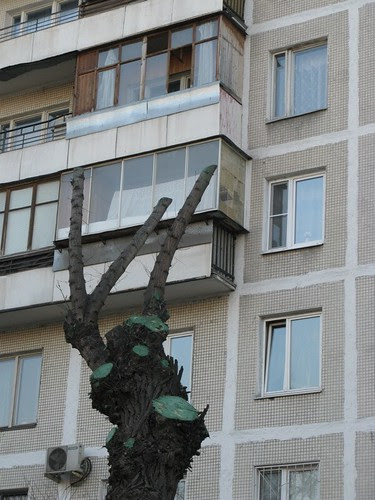 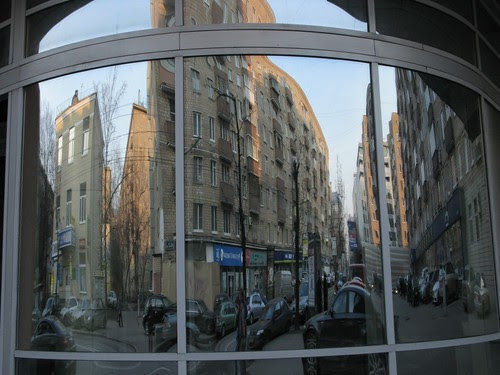 I've just done some spring cleaning here: deleted all those Daily Bookmarks posts that have been littering this blog since August 2008. I'm setting up a separate place for them, will link to it later, once I'm done with the transfer.

I'm aware that the domination of Russian- and Ukrainian-language links and the messy, non-systematic nature of my reading seemed confusing to some readers, but I'm addicted to bookmarking and sharing my daily reads, and it's also an okay way to remind myself of what I was up to on the days when I was too exhausted to write - which now happens to be pretty much every day.

My own biggest problem with these bookmark posts was that they created an illusion of some activity here, while there was none whatsoever most of the time. So now I'll have to face my own silence and do something about it. I guess I'll be littering this blog with pictures again now - because with so much reading that I do every day, and with the six unbearable and unphotogenic winter months that are now behind us, I crave images like crazy.
4 comments:

My poor neglected blog: I'm spending too much time on Twitter...
No comments: