On a different note, here's some of what keeps me from blogging too much - something I've very proud of... 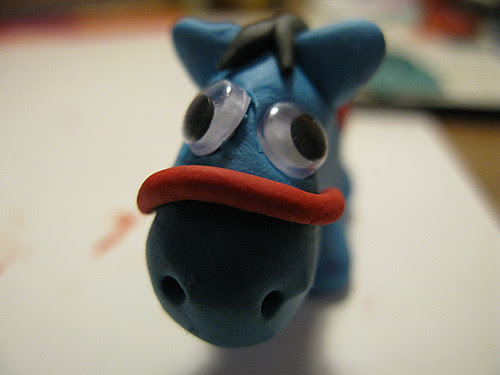 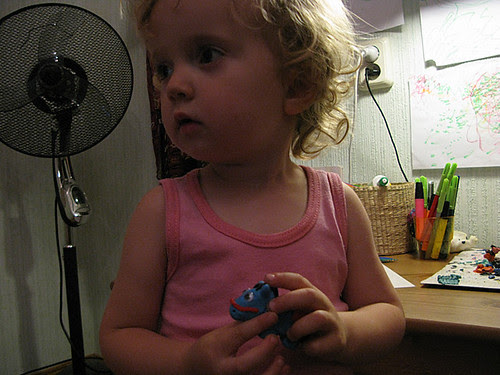 The daily pain of thinking about my father and his death is now exacerbated by the approaching Jahrzeit, July 16-19.

Today, I bought a translation of Oliver Sacks' book - The Man Who Mistook His Wife For A Hat: And Other Clinical Tales. I remember looking at it a number of times in the past few years, during my father's illness and following his death, but I didn't have the guts to buy it then. I leafed through it once again today, then went ahead and bought it. Read a chapter and a half, feeling that perhaps now there was a safe distance between myself and my emotions, and that I might finally be able to attempt understanding at least a little bit of what had happened to papa, even though the cases described in these chapters weren't even close to his.

But then, for some reason, I decided to search for Sacks' articles in English, and found a story about a condition similar to papa's - a post-stroke aphasia patient's story - published in the New Yorker around the time I came to Kyiv to give birth to Marta, in the Oct. 31, 2005, issue. Papa had the first of his three strokes half a month after Marta was born. On Dec. 17, 2005, or sometime around that date.

I haven't finished reading the text yet. It's a torture. Not just because it's like getting a glimpse of what may have been going on in papa's mind while he was not able to speak. As overwhelming is to compare the kind of treatment he was getting in Kyiv to that described in the article. The treatment that doubled the horror and the humiliation of his condition. I was spared from observing much of it, thanks to Marta, while my mother had to go through that hell all on her own.

Other thoughts keep popping up: how papa managed to return to work two months after that first stroke - and how he was crushed again in August 2006; how we tried to teach him to write again, using some silly elementary school textbooks - and how he resisted these attempts; how unbearably kind he was in his last weeks.

Not sure why I'm writing this. It's not that I don't have things to say. I just don't feel like saying much on this subject. But the New Yorker piece has caused a little spillover, that's what it is.
2 comments:

I'm talking cars with Marta, the way we always do on our way to the park - "What's the name of this car? And this one? And that?" I'm supposed to look at each car we pass and respond to her. She's got my driver's gene.

A young man and two older women walk by, engaged in a lively discussion of something very trivial. They look totally inconspicuous - except that they are chatting in Ukrainian. But I'm still fresh out of Kyiv, so I don't pay attention at first, and by the time I recall that I'm actually in Moscow, they are already far ahead of us.

At the playground, I talk with a young Russian woman whose son is Marta's age. We discuss our kids' eating and sleeping habits, and then I mention Turkey, and she says she kind of hated it there - because of the way Turks treat Russians, and because of poverty. But poverty there is so different from our poverty, I tell her: it's a drunken kind of poverty here, while there... But she interrupts me, somewhat angrily: "Yes, and over there it's a hungry kind of poverty."

To my comment about the way they park on Khreshchatyk now, she says: "Well, with a president like this, it's not surprising."

As we say good-bye to each other, it turns out her name is Veronica. But everyone calls her Vika - which I, honestly, consider extremely unkosher.
6 comments:

Yet another Kyiv cab driver story.

A hideous old Zhiguli car. A very skinny, mustachioed, greasy-haired middle-aged driver, with a suntan of someone who spends long hours working in the garden. The odor of sweat permeates the car, even though all four windows are rolled down.

After a few near-accidents caused by people who don't know how to drive, we begin talking about the general mess that's now a norm in Kyiv.

The driver says things were great in the Soviet times: from the 1970s to the 1990s, there was order and life was easy.

I diplomatically respond that although I tend not to have any illusions about the Soviet period, I do agree with him 100 percent on certain points.

"Ukraine needs to join NATO as soon as possible, or else Russia will swallow us," the driver says.

I find this switch quite hilarious, but tell him we still shouldn't rely on others too much, citing Sarajevo and Srebrenica as examples.

By the end of our ride, I tell him I'm on my way to the dentist, and he complains that he's got almost no teeth left, but isn't doing anything about it because he's scared: they use the same needle on all their patients, and he fears he might get AIDS this way.

"I'm telling her [the dentist], 'You, silly idiot, get me a clean needle!' and she replies, 'No way, we haven't got enough needles for all of you!'"
1 comment:

I'm trying to get rid of the photo backlog, so here's a set from my quick trip to Brovary - 65 photos, including the ones I posted earlier, here and here.

- Although I wrote previously that Brovary was a pleasant surprise - clean, full of kids and playgrounds - this isn't really reflected in my photos. And it's not completely my fault - because, honestly, Brovary isn't some sort of a dream town, even though I liked it there. It reminded me of Kyiv ten years ago or so, one of the remote neighborhoods of Kyiv, perhaps, sleepy, with comparatively few cars, and not drowning in garbage. I'm afraid that in ten years Brovary will turn into a nuthouse just like today's Kyiv - and, the way things are going now, I don't even want to think of what awaits Kyiv in ten years.

By way of illustration of this point, here's what Lisova subway station looked like when I returned from Brovary: 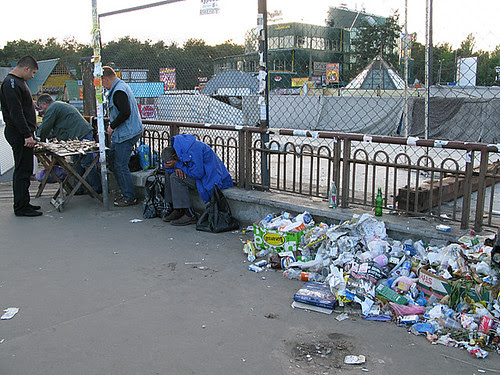 And here's a picture from Brovary: 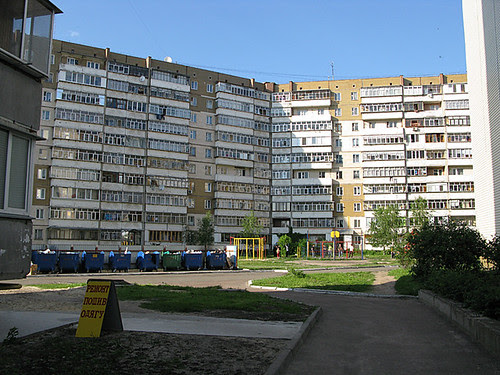 - Mishah used to have an apartment in Brovary in the 1990s, so I went looking for it. He gave me the wrong address, though, and I ended up taking pictures of a totally different building, but that's okay, because I had a very brief but interesting encounter with a couple of locals there. 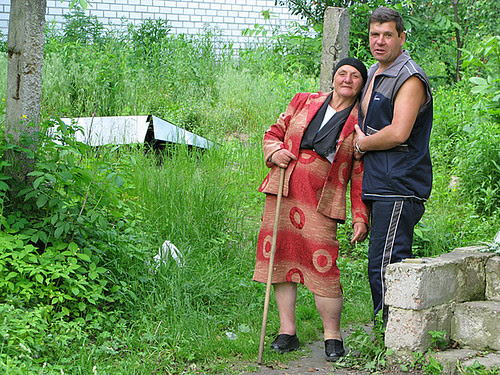 The woman in this picture hadn't seen her brother in 20 years - because she'd been in jail. She called to me as I walking through the grass behind the building that I thought had been Mishah's, and asked me to take a picture of the two of them. She wasn't very sober, and neither was he, but they were both extremely happy. The most moving part of it was when she almost offered me to have a drink with them. She didn't - it must've been obvious that I'd decline - but for a moment, she looked as if she wanted the whole world to share in her joy, to celebrate their reunion. I took a few pictures, wished them health, and walked off. Back home, my mama couldn't believe I didn't ask the woman some questions: like, what she'd been serving time for, how long, etc. My mama would've made an awesome journalist, and me, I guess I just chickened out.

- Brovary has changed a lot in the past decade. There is, for example, a humongous new mall at the town's edge now, complete with a kart racing track and a skating rink - and a new church right next to it: 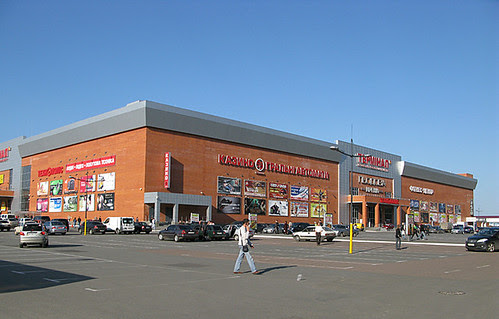 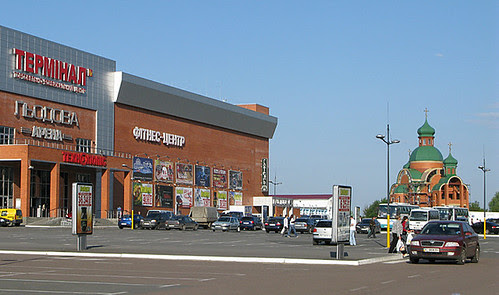 - Independence Street used to be named after the 50th anniversary of Komsomol: 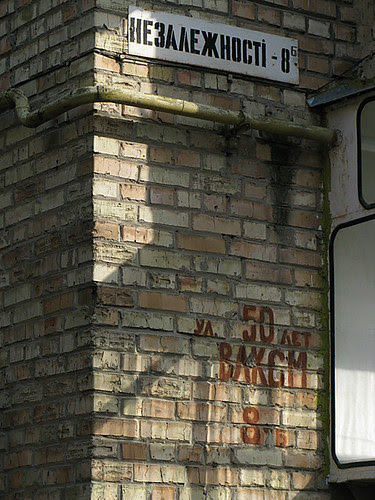 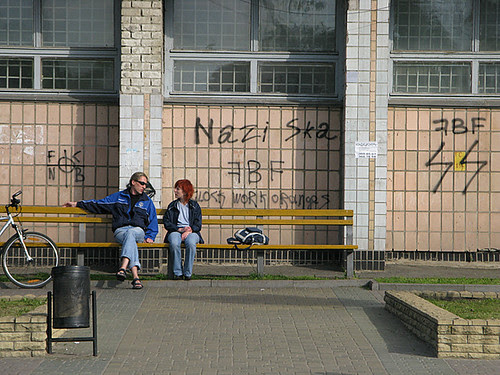 And a Lebanese flag on someone's balcony: 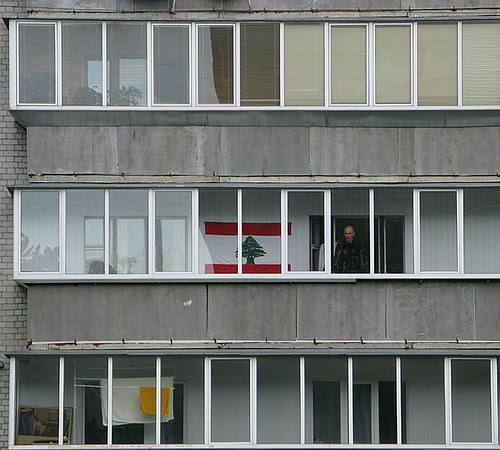 - Stuff they are selling at makeshift street markets - from pickles to doors: 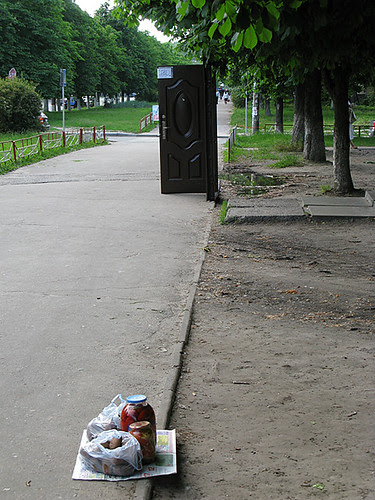 - Finally, here's how to write 'LOL' and 'Ha-ha' in Cyrillic script: 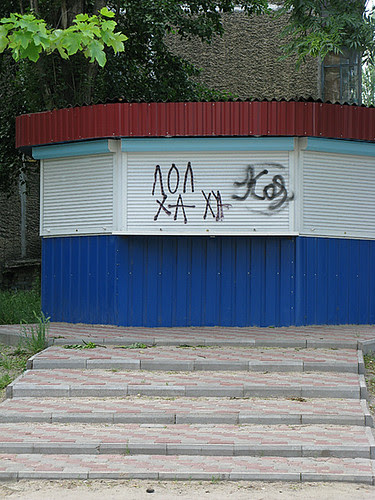 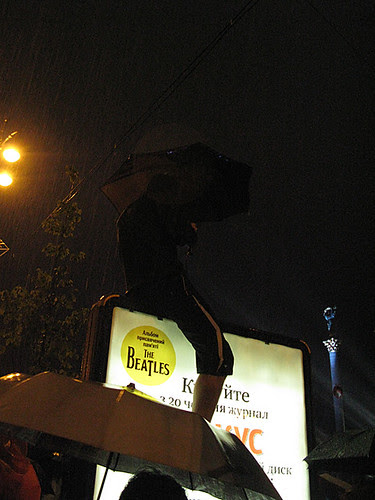 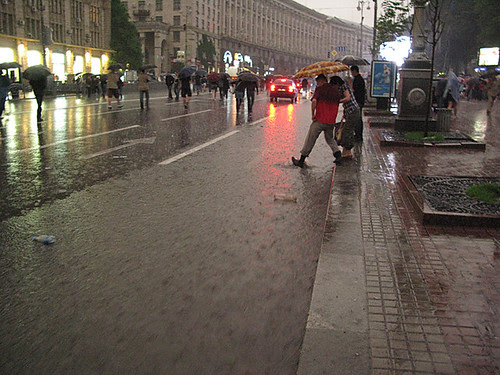 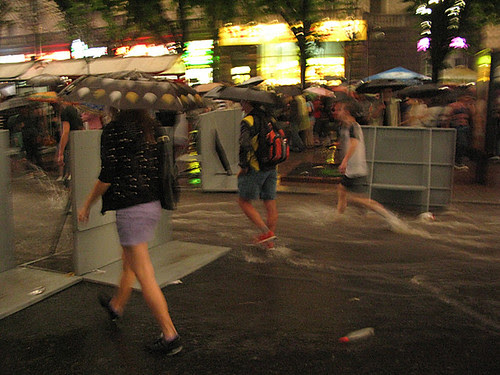 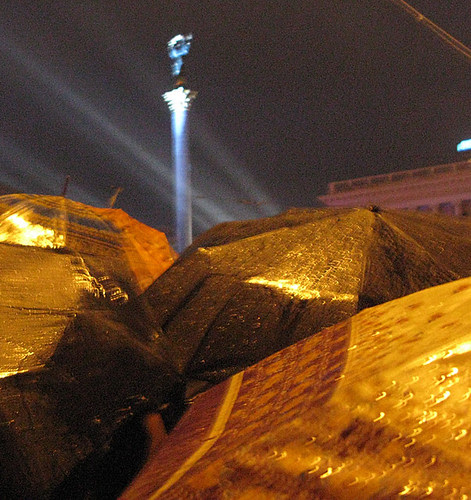 Mikheil Saakashvili was at Maidan - but without his friend Yushchenko. Kuchma was there, too - which was hard to swallow. His daughter, Pinchuk's wife, was wearing something awful. Pinchuk looked genuinely happy.
2 comments:

A few more random Kyiv pics, just to get myself distracted from the subject of the previous entry... 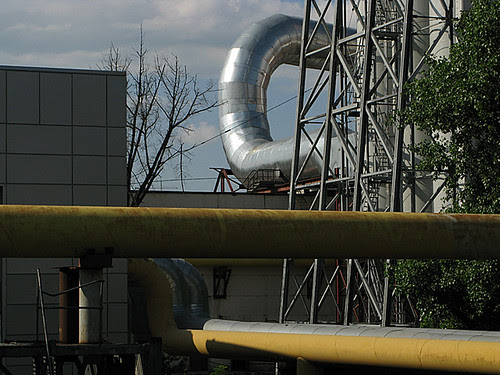 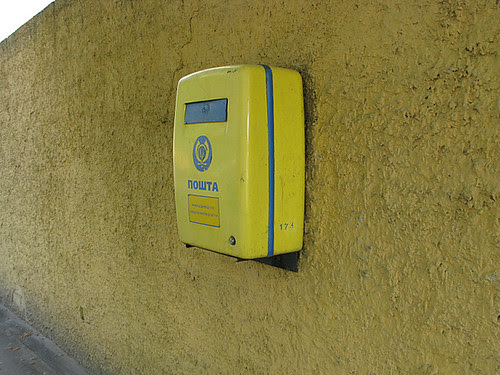 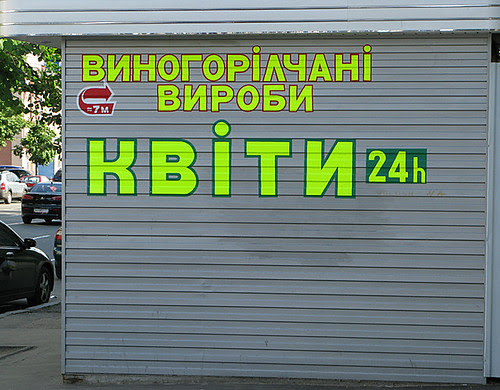 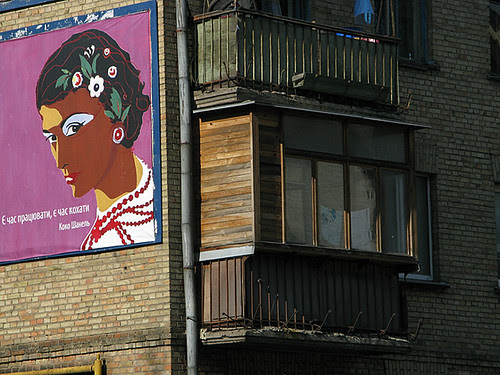 "There is time for work. And time for love." (Coco Chanel) 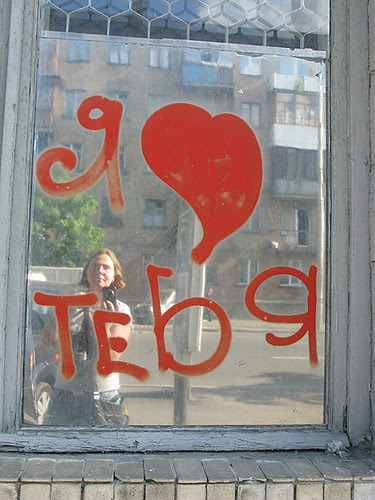 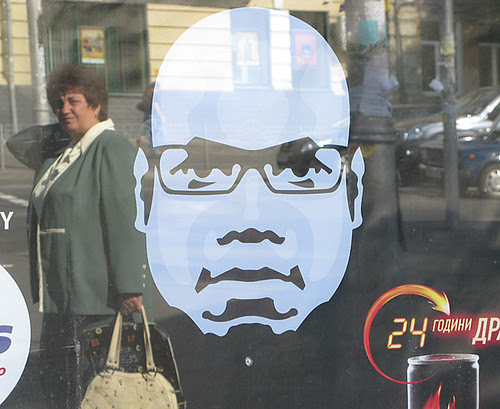 This guy's billboards are all over the city, but for some reason I don't remember his name. Sorry.
3 comments:

Walked by Eric's Bierstube at Ploshcha Tolstogo yesterday, was horrified by the Nazi stuff on the walls in the courtyard there: 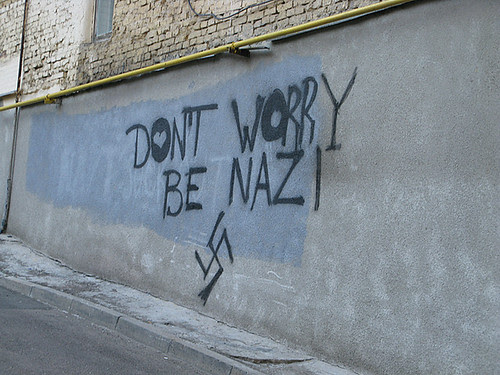 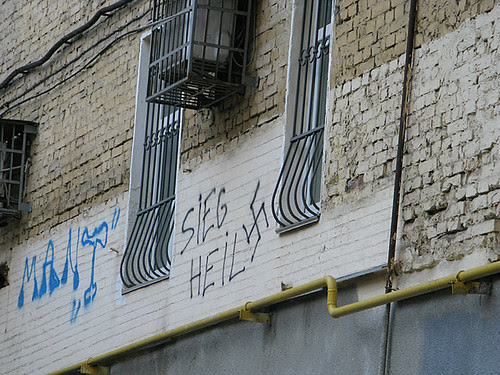 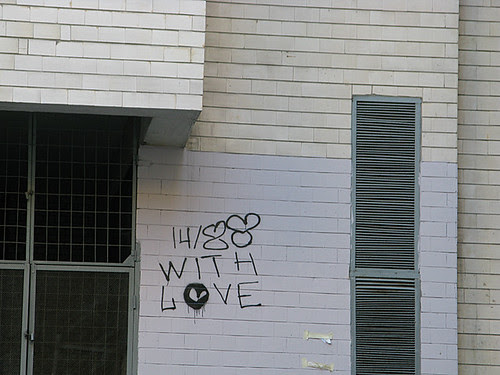 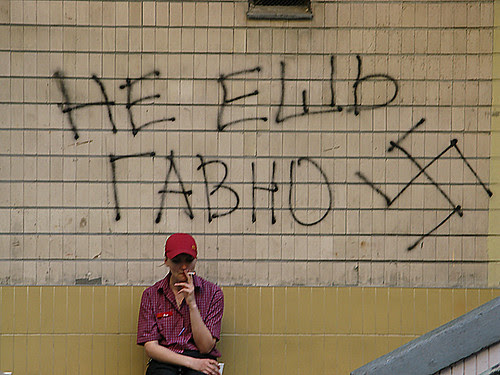 This last one most likely refers to a McDonald's nearby - "Don't eat shit."

Reminds me of St. Pete five years ago, but to be seeing it here hurts a lot more.
4 comments:

Here are two more pics for the 'Turks in Ukraine' series at The Turkish Invasion (the first installment featured my shot of Karadeniz Cafe at Poznyaki). 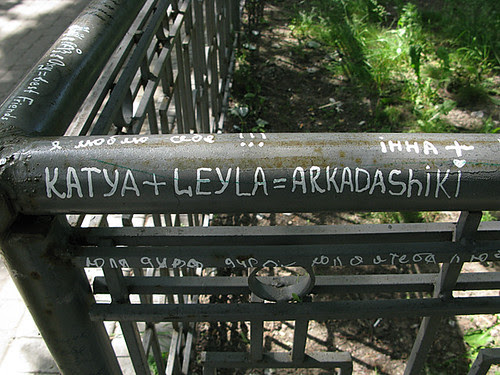 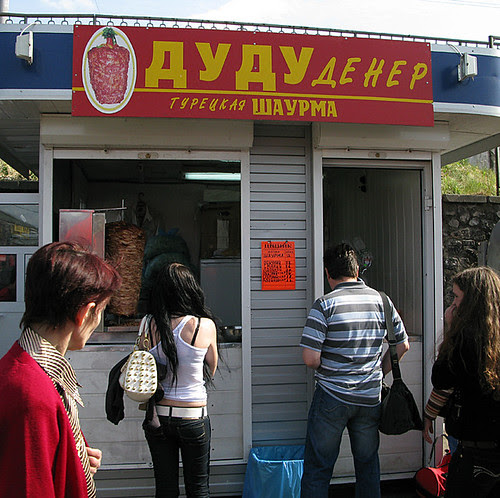