Lovely when we switch to summer time - even if winter's still here.

And it is still here, totally: 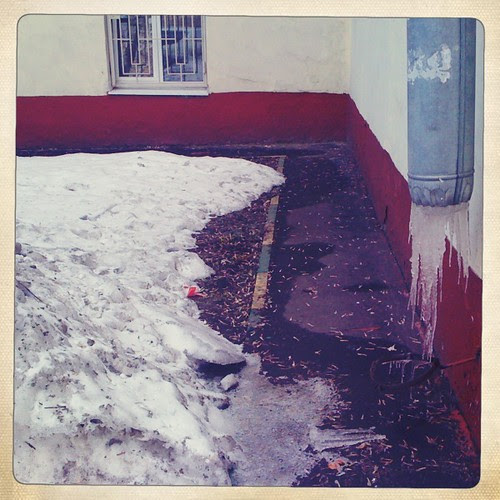 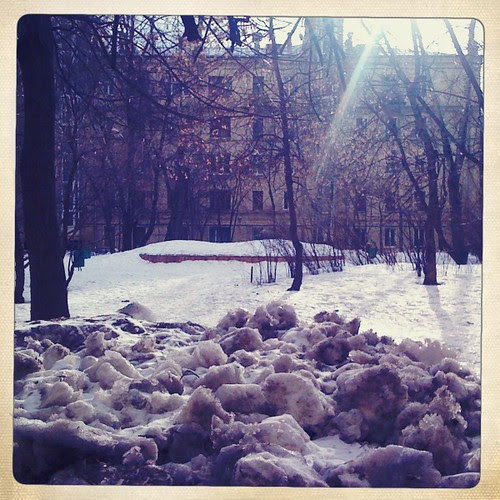 At the market today, I learned from one vendor that in the North Caucasus, for example, spring is already so far advanced that their wild garlic/cheremsha season is now over. The stuff that I bought today is from Moldova: 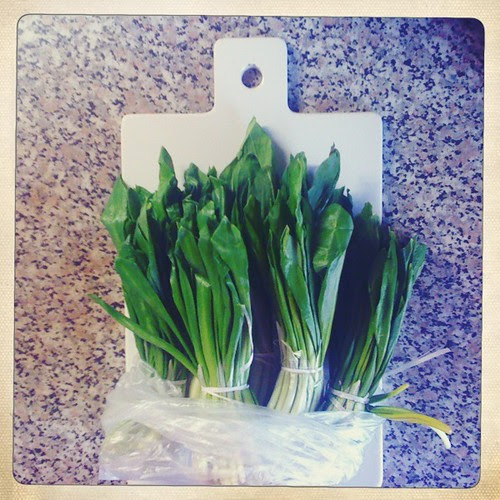 My two posts on cheremsha, weather and geography from 2009 are here and here.

It snowed on April 19 back then.
8 comments:

End of March in Moscow:

Sunny outside. A pot-bellied neighbor is smoking on the balcony, with no shirt on. As if it's spring already. Must be one of those brave Orthodox Christians who swim in icy water in January, pretending it's River Jordan.

Three minutes later, a snowstorm. A snow wall. Or, as if some prankster has thoroughly painted our window white, thick white. 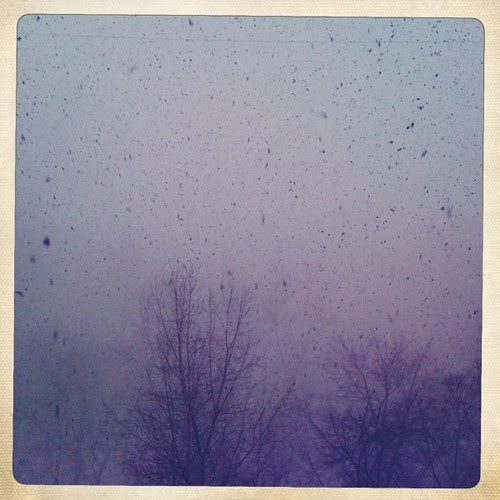 A bus stop at Nikitsky Boulevard, between 7 and 8 PM a few days ago, cars moving really slowly, no trolleybus in sight.

A Bentley parks in the middle of the no-parking zone by the bus stop. A stocky, tough-looking, middle-aged driver in a suit gets out, lights a cigarette and starts walking back and forth, occasionally glancing in the direction of a fancy clothing store nearby. Naturally, he has an air of superiority about him.

Five minutes later, a girl emerges from the store and walks towards the Bentley, accompanied by a bodyguard. She looks typically classy; he looks a few degrees tougher than the driver.

The driver's back in the car, the girl's in the backseat, the bodyguard shuts the door after her, but stays outside. The car begins to back out.

But, the traffic jam's still there - and a white SUV is right behind the Bentley.

The Bentley's driver begins to honk like crazy, but the SUV's not moving. For one thing, it's got no space around it to move away to.

Suddenly, the girl's bodyguard gets visibly jittery. He gesticulates to the driver, orders him to use the space in front of him to get out on the road, instead of honking and trying to back all the way out. The driver obeys, the bodyguard gets inside the car, and off they go, slowly but steadily.

When the Bentley's gone, we, the folks at the bus stop, get to see what had unnerved the bodyguard: the white SUV sports a Saudi flag decal on one of its windows - a Quranic inscription and a sword, ominous stuff in the context of Moscow - and the driver doesn't look like a tiny little man, either, judging by the size of his hand (see picture below). 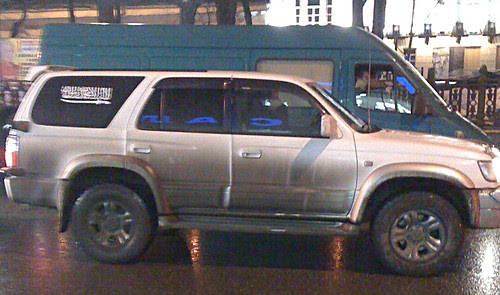 Could be some Kadyrov's buddy, and, in any case, definitely not the type who'd tolerate all that honking business.

P.S. Or, it could be that the guy in the SUV is totally harmless, has nothing to do with any of the thugs, had bought his car somewhere in the Emirates, already with the decal, and decided not to take it off, because, as we've seen, the message it sends works really well.

P.P.S. Aposematism is the word: "Aposematism has been such a successful adaptation that harmless organisms have repeatedly evolved to mimic aposematic species [...]."

I don't have enough abstract thinking skills or attention span for philosophy, but I've realized that the way we are dealing with one highly unpleasant situation that arose last week is actually a good illustration of something known as "moral relativism": we all have different responses to the same situation; our own response would differ from those of others if we were those others ourselves; similar situations in the past, which did not affect us so directly, had us react differently than the way we are reacting to this particular situation now. Whatever. Hard to say if I'm on my way to emotional recovery or am heading in the other direction right now, but, either way, that sentence above is too much for Twitter, and that's why I'm posting it here. 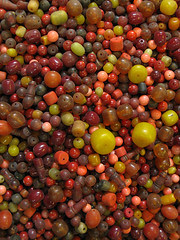 Bilingualism at a public bathroom in Kyiv - a request (in Russian and Ukrainian) to please not dump objects, as well tea and coffee, into sinks: 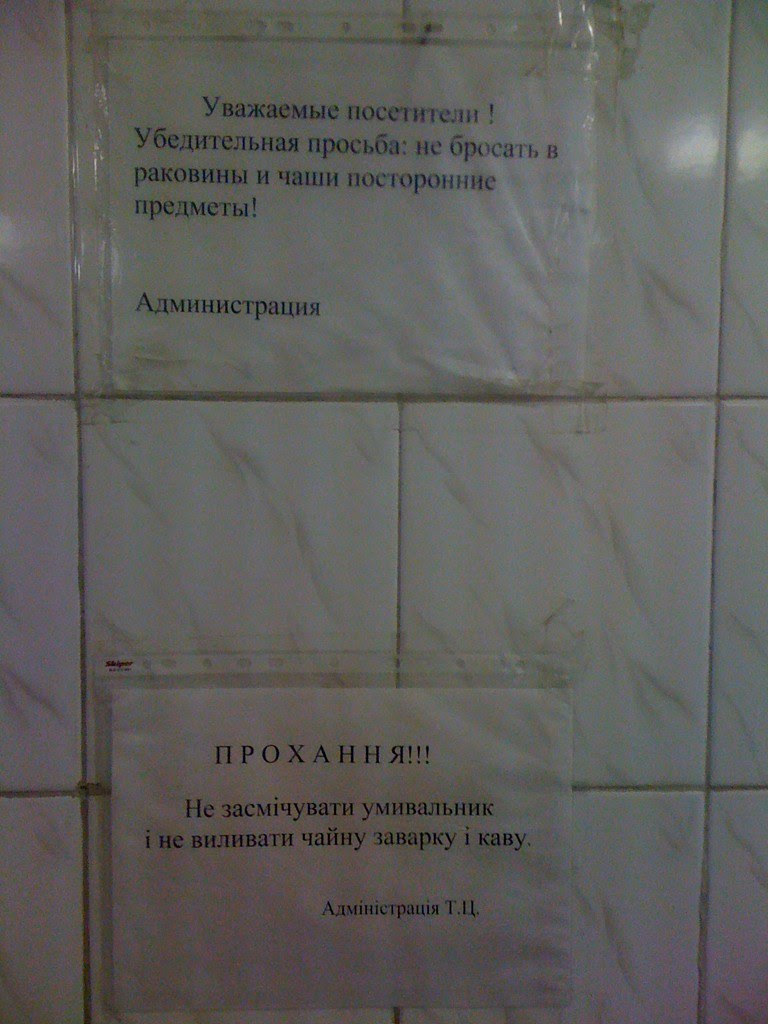 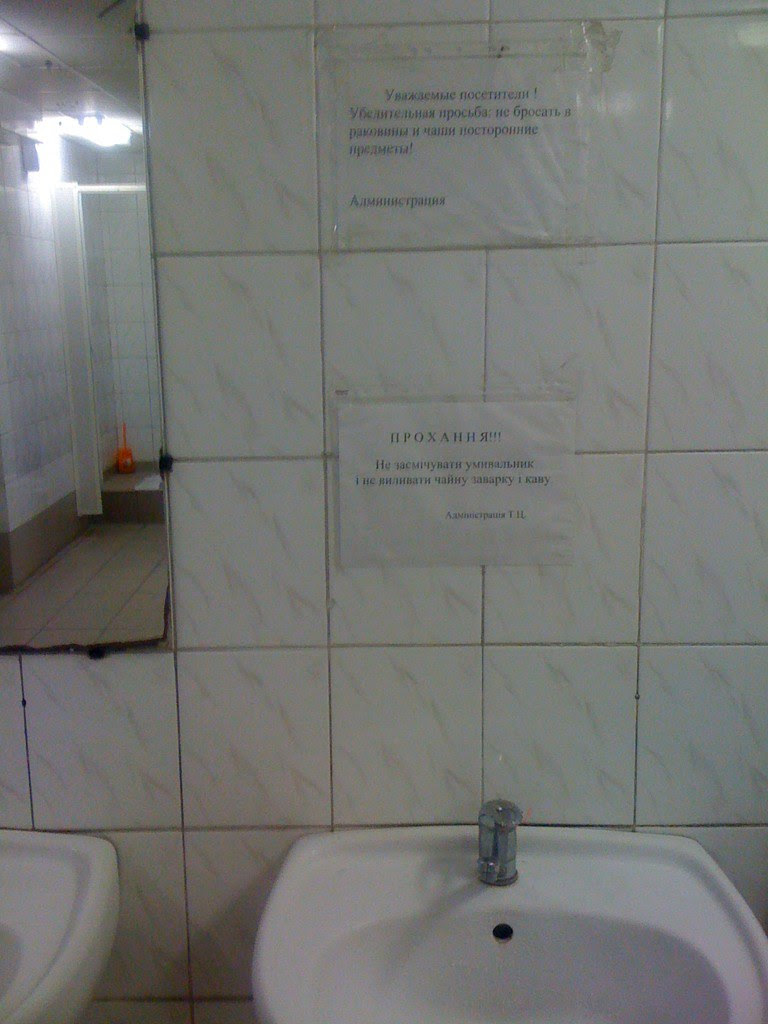 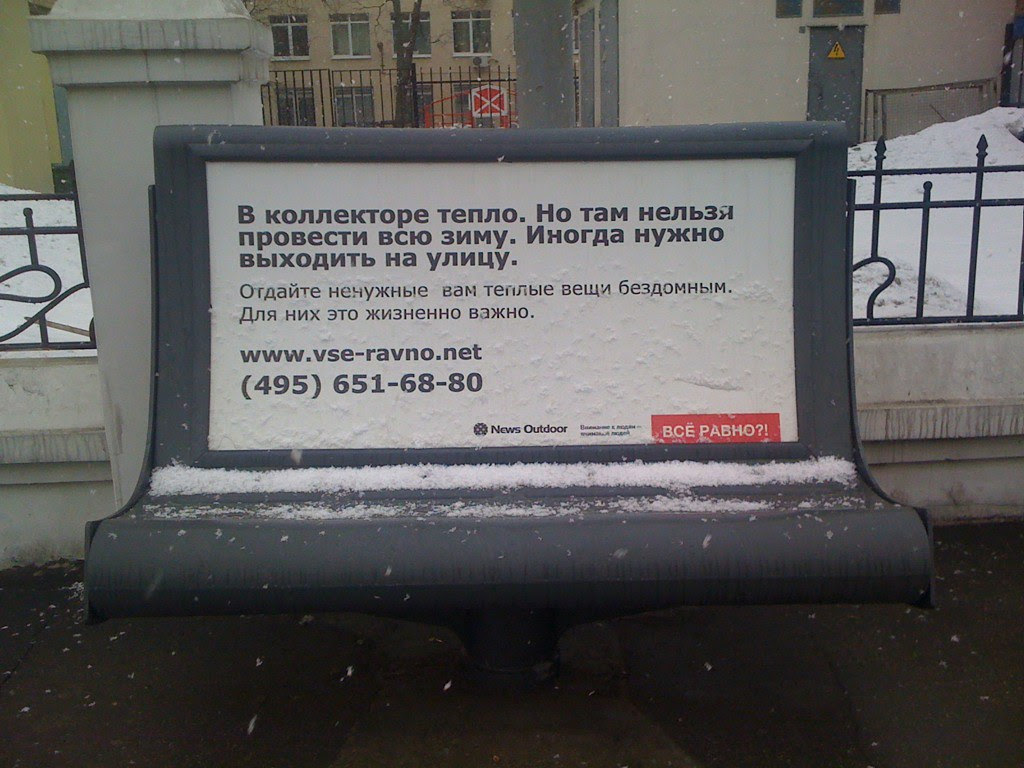 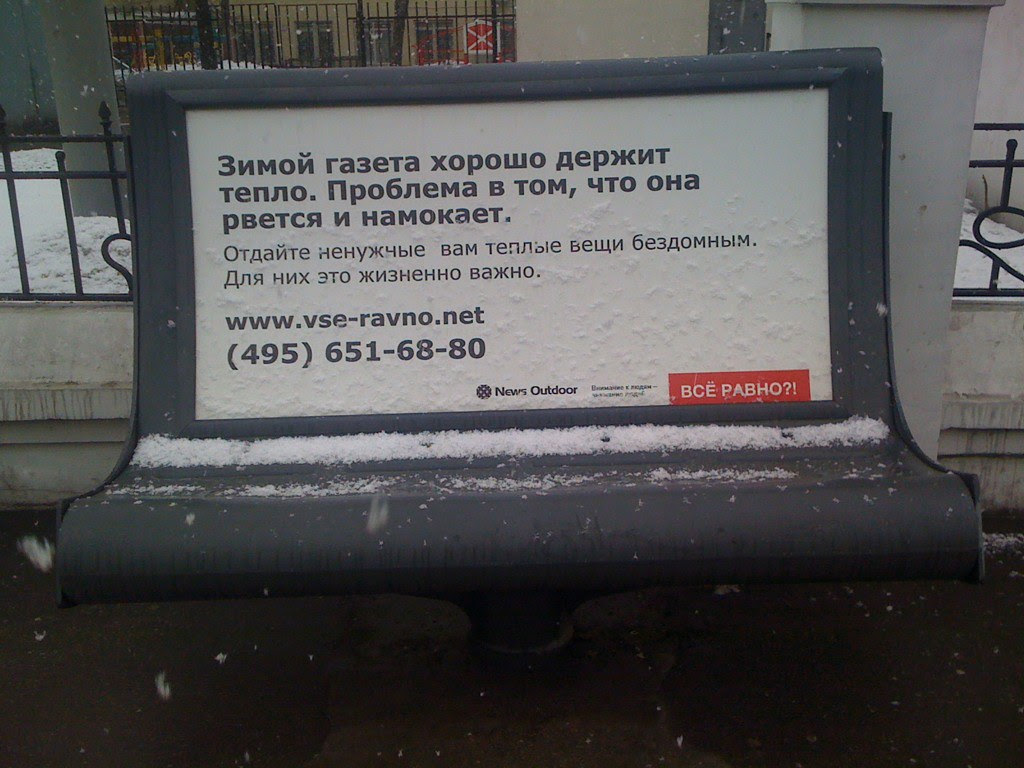 Donate things you don't needs to the homeless... 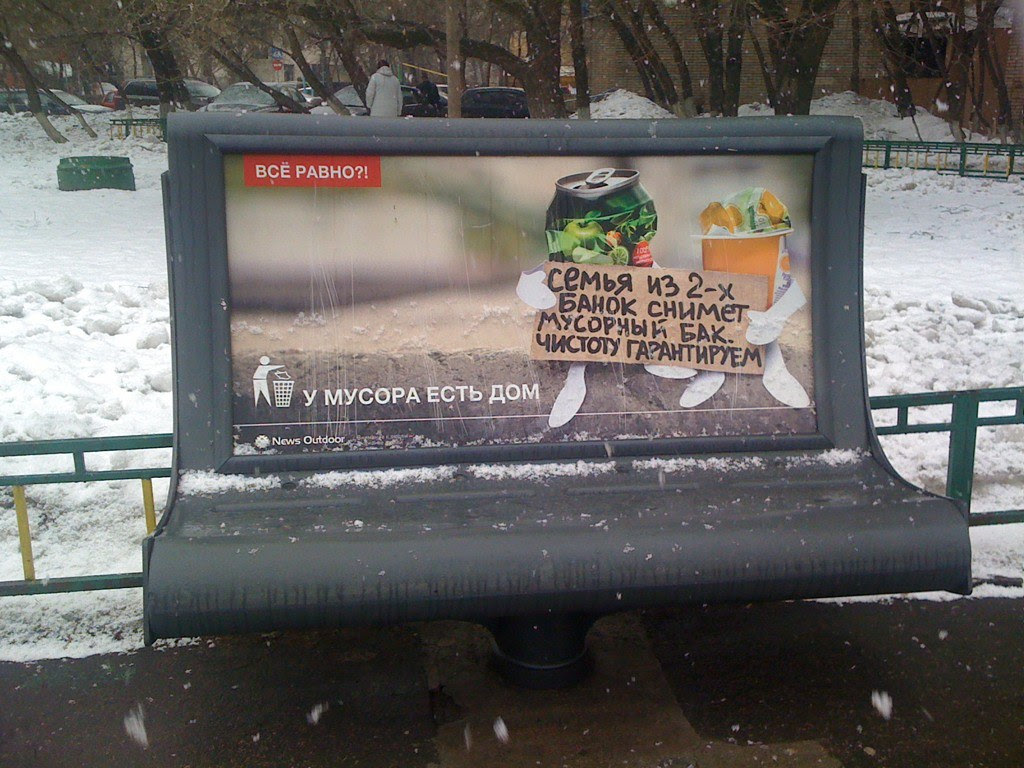 Garbage is not homeless: "A family of two cans will rent a garbage container"...

Салам (Salam): Marta read this word/name written on the back of a bus seat - and it was so much nicer to explain the meaning of it to her than that of the previous one a few days ago :) 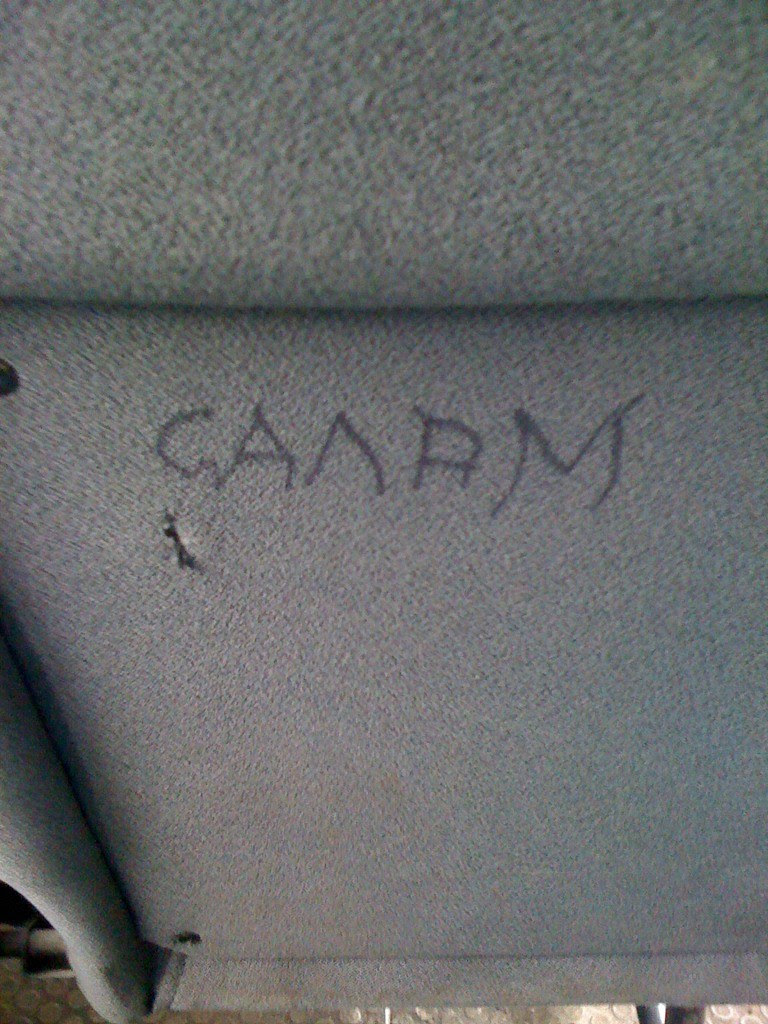 Couldn't drag myself out of this store yesterday - hearing Kurt Cobain and seeing him like this, all of a sudden, on a pretty huge screen made up of nine regular TV screens - it had a mesmerizing effect on me... 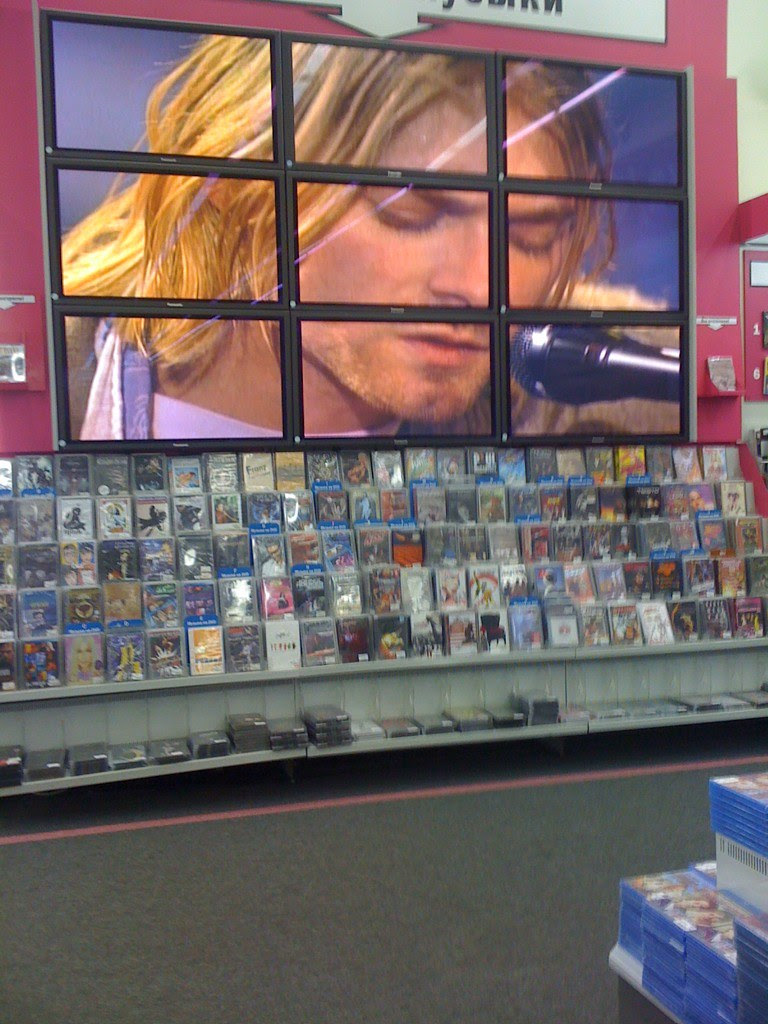 One drawback of taking public buses with a 5-year-old kid who is learning to read is that she would absolutely try to read whatever is written on the seat right in front of her (in our case, it's the word 'bitch' in Russian)... 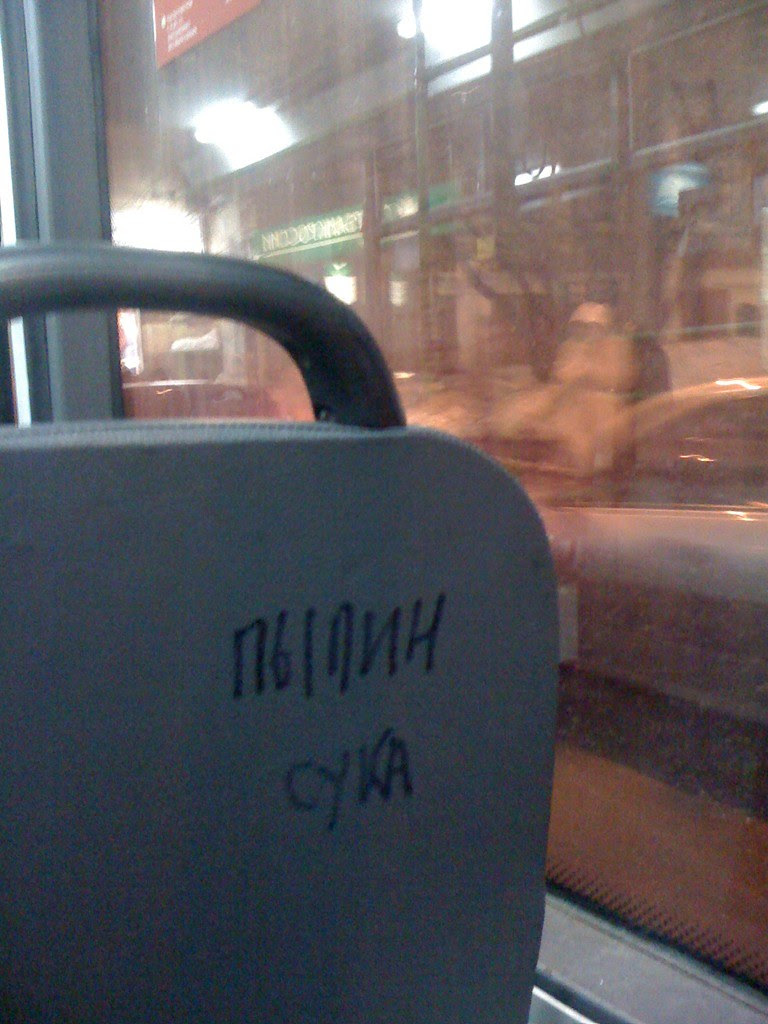 Sound from the Kievsky Train Station: a safety/anti-terrorism announcement that shocks some tiny part of me every time I return here from such a relatively peaceful, innocent place as Kyiv...

And a few pics taken from the train: 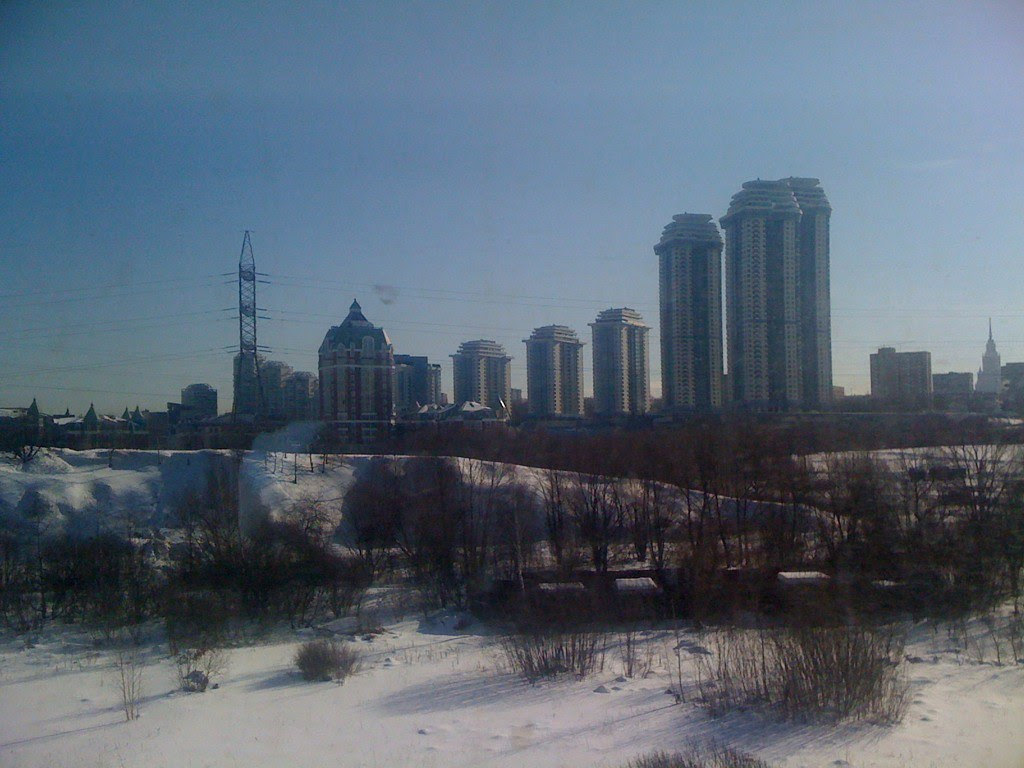 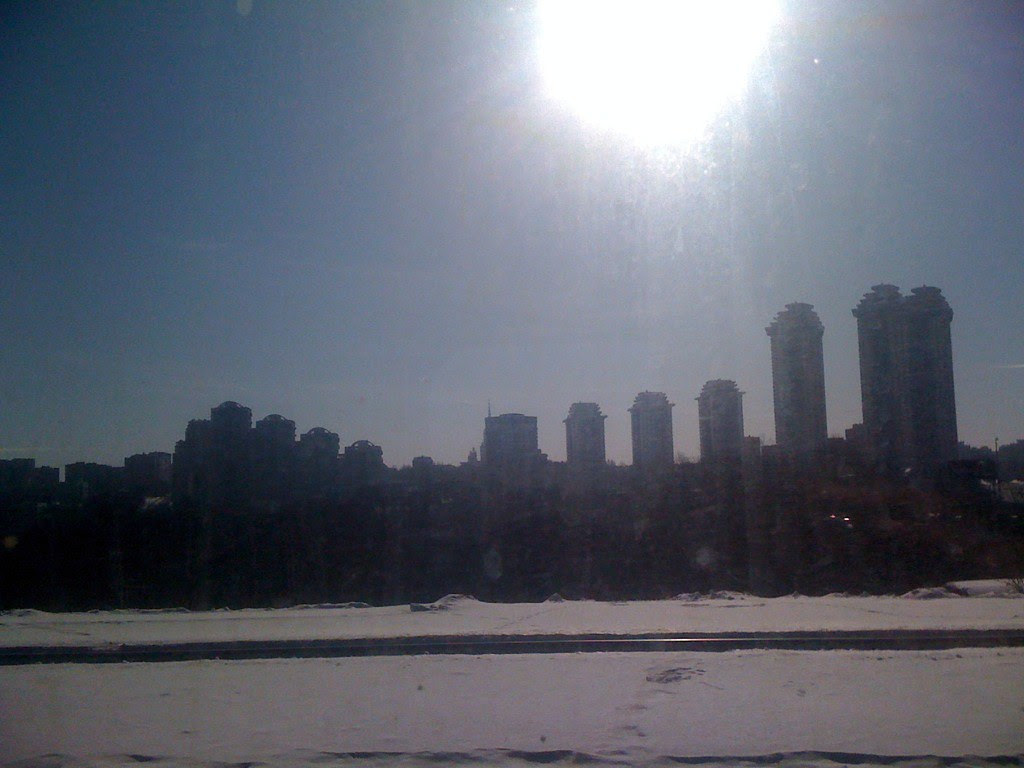 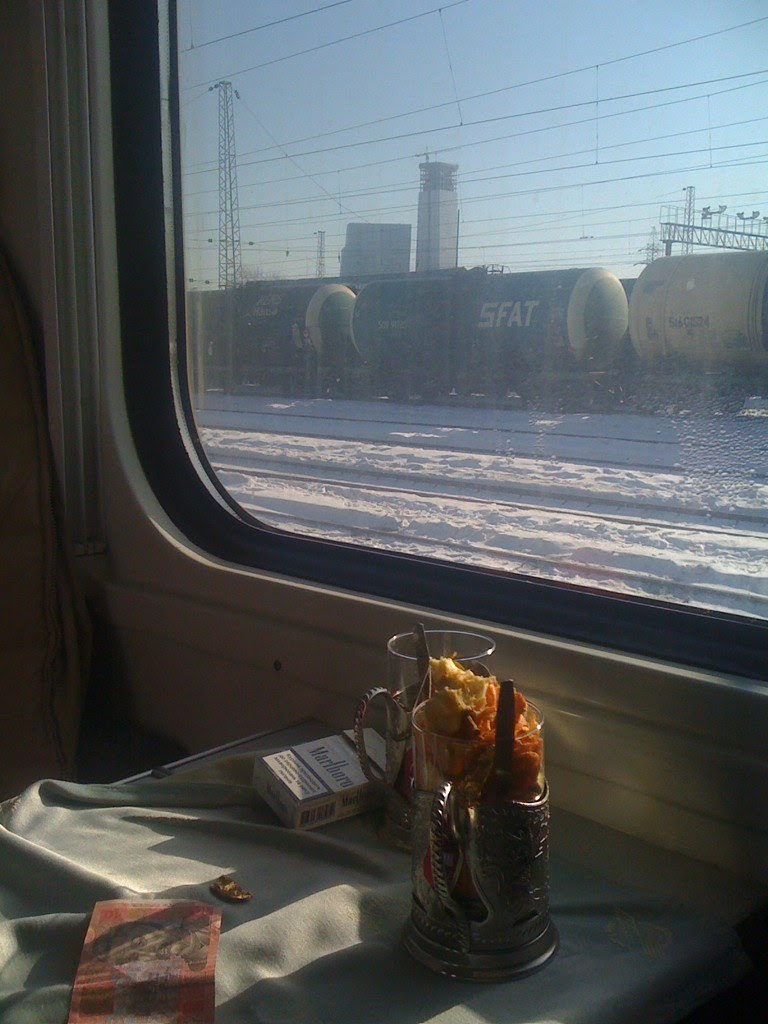 After days of walking around Kyiv and getting myself quite terrified and depressed by what I see and hear, and after yet another Friday night spent watching various political talk shows, I catch myself thinking this:

If I lived elsewhere and didn't really give a damn about this place, I'd just laugh at those pathetic idiots running this city and this country - they are horrible managers, with absolutely no idea of what a decent city should be like, tacky dorks, losers, nothing more, an embarrassment; and to distract everyone from their incompetence, they're screaming at each other on TV not only about politics, but also about literature, language and culture, which is often quite amusing, because they are as clueless in these fields as in most others.

But I do live here, and I do care, so it's heartbreaking to watch it all, knowing that they aren't going to stay away from any of it, because all these mismanaged projects bring them pretty huge personal fortunes, and all this hysterical screaming about culture issues keeps them popular with their voters.

And I know that things could be much worse - there're plenty of examples, everywhere - but I also feel that we are slowly getting there ourselves.
No comments:

I've finally visited the Holodomor Memorial. Lit a candle. Looked up the village some of my ancestors are from: only three people starved to death there in 1932-33, most likely because this village is located right next to a town. One of the three names is our family name: Ivasyuk. Ivasyuk Andriy Stanislavovych. No idea if he was related. Could be. Feel very shaken now. 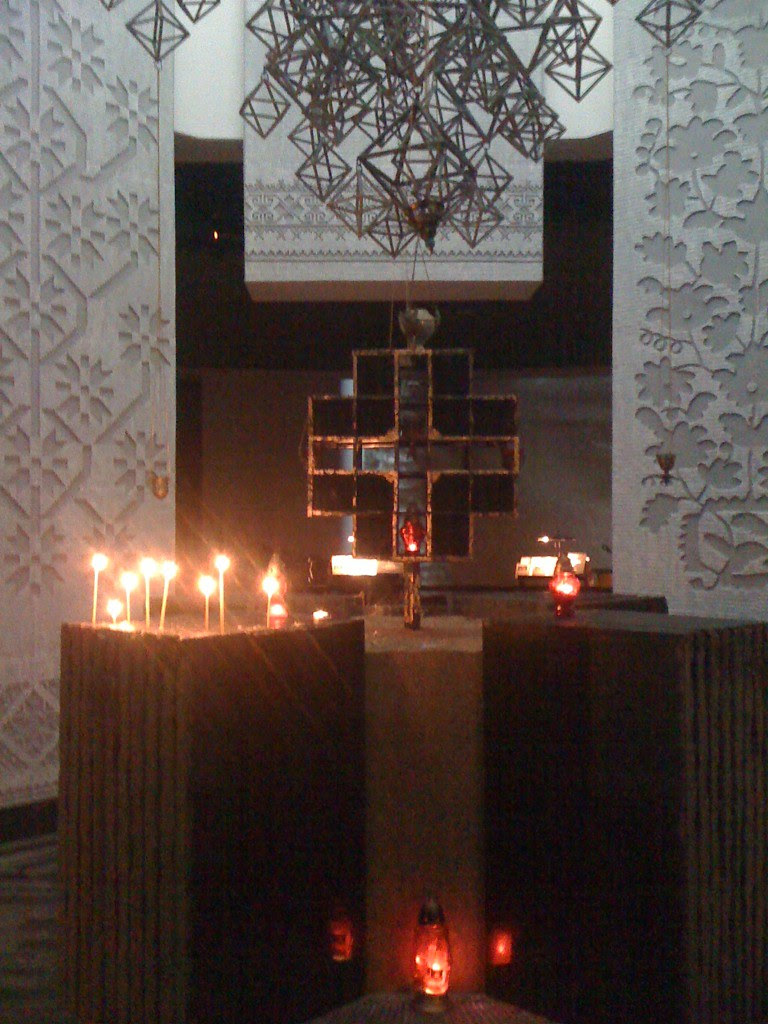 And this is the neverending reconstruction of the Mariyinsky Palace: 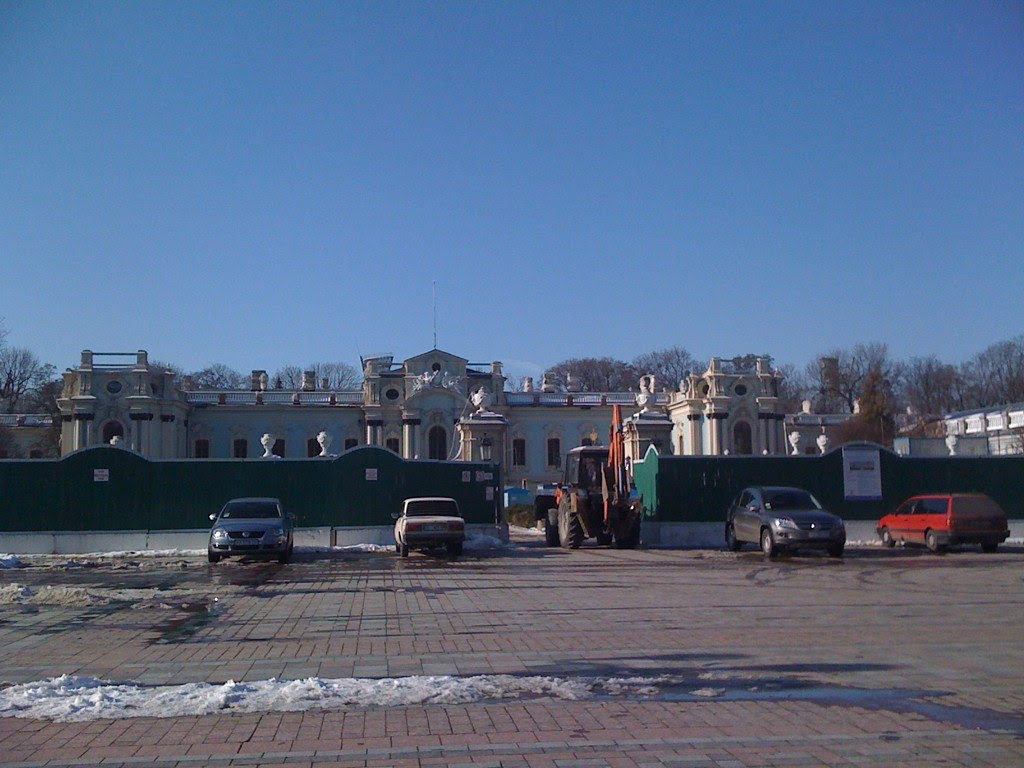 A small parking lot seems to have been set up in front of the green fence.

The project's start date is 2007, and the completion year is, quite conveniently, left out. Who knows, maybe they are so busy relocating some of the funds meant for Mariyinsky to the construction of their dachas that they really have no idea when this restoration is going to be over. 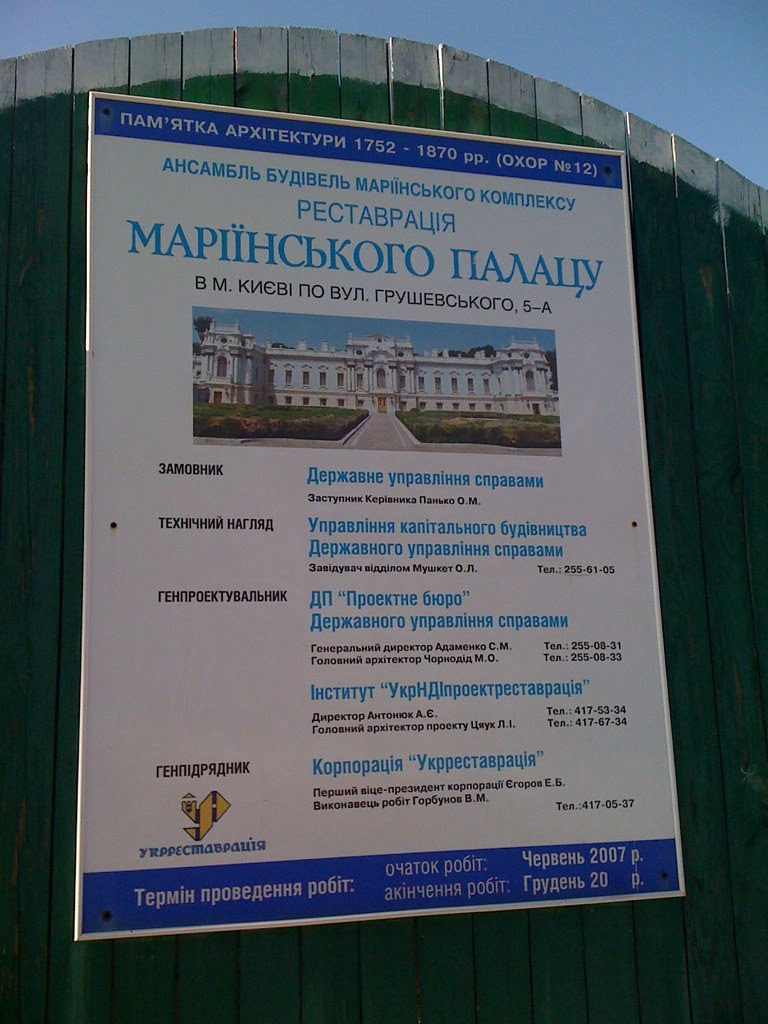 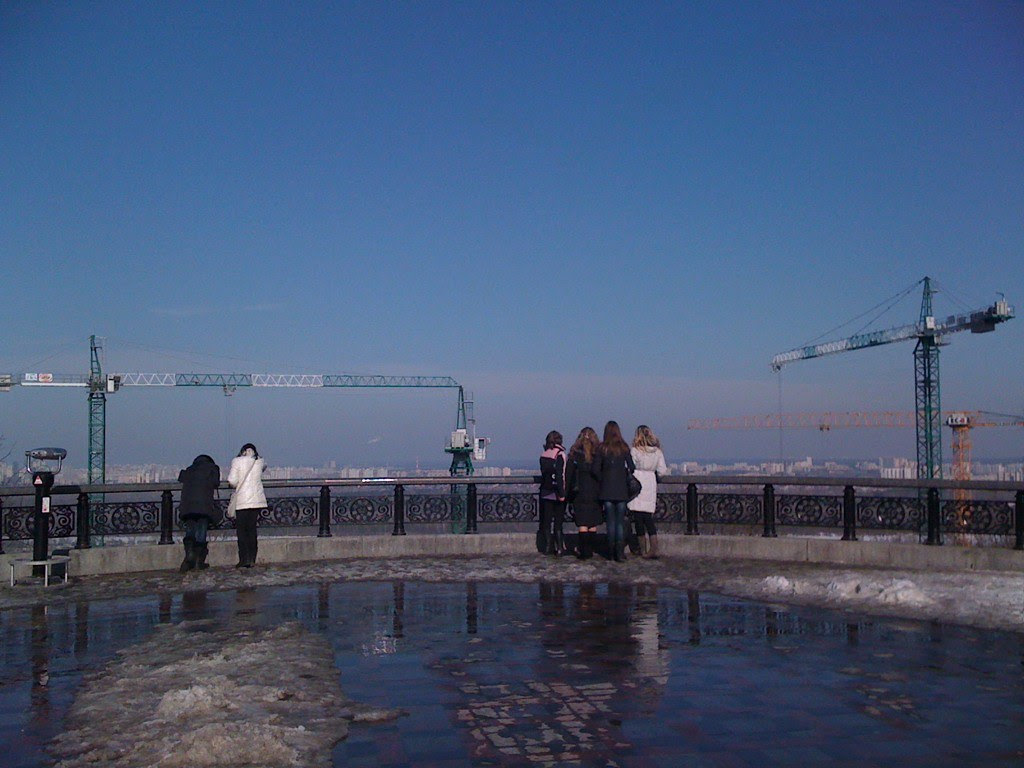 Somehow, I've only now got to see the helicopter landing pad that they are building for Yanukovych.

The scale of this construction - and its location!!! - are absolutely outrageous.

I'm speechless with fury. Will try to get there during the day and take more pictures.
1 comment: