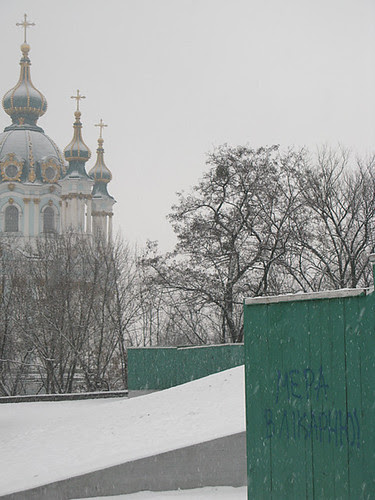 "[Send] the mayor to the [mental] hospital!" 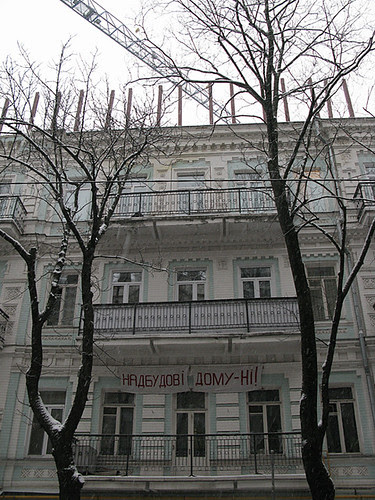 "No! to construction atop this building!"
2 comments: 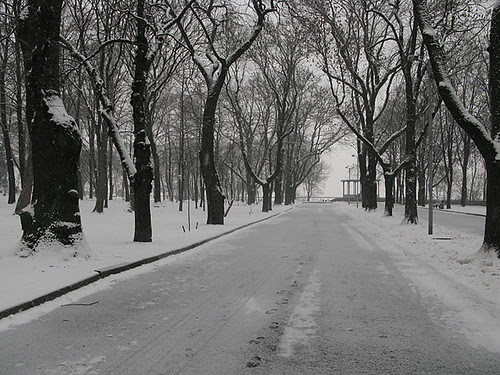 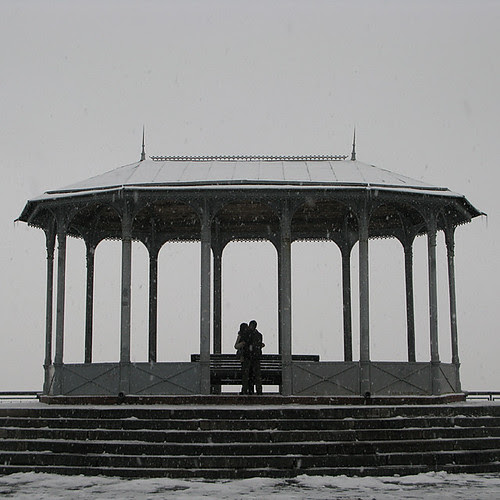 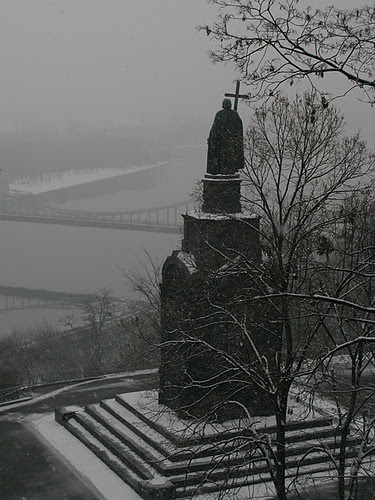 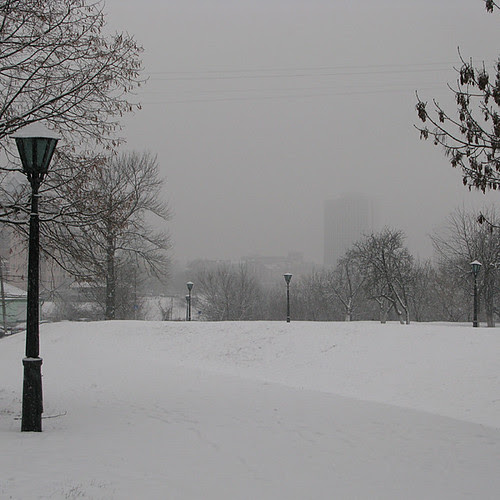 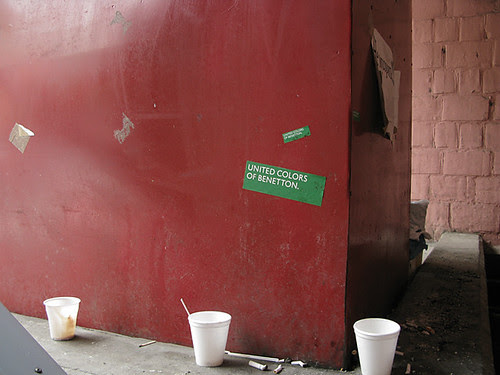 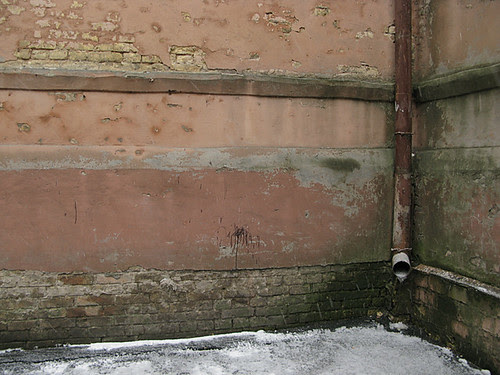 Pickled tomatoes from a shop on Velyka Zhytomyrska, which sells them for 10 hryvnias ($1.25) per kilo (delicious, and also a good hangover remedy): 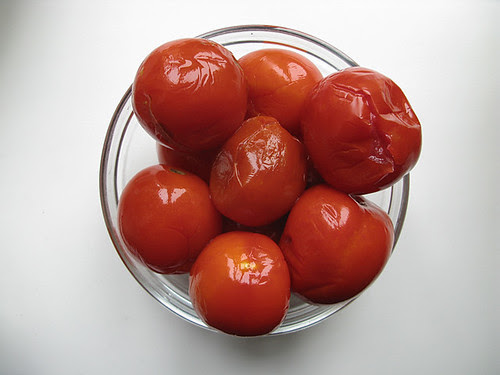 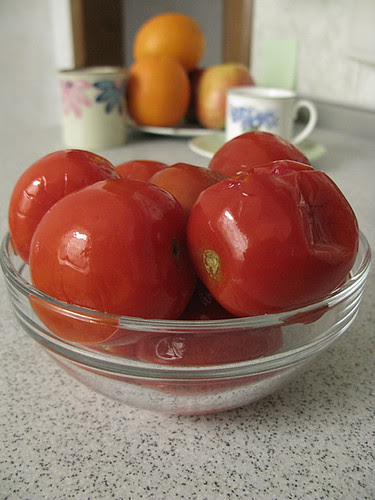 - A middle-aged, nondescript man with an ancient laptop was sitting at the table next to mine at a coffee place today. The laptop had an antenna kind of thing sticking out on the left-hand side - a built-in modem contraption or something, I guess. He was checking his Mail.ru email account. Marta was being noisy, and at one point I told her to take pity on this man - what if he had ten kids at home and escaped to a cafe to get some work done, in a comparatively quiet environment? When he stood up to leave, I noticed that he placed his laptop into a plastic bag. Then he lay it on the table. While he was putting his jacket on, I noticed that the plastic bag had a logo of the Party of Regions/Партія Регіонів on it. Then I think I noticed something even weirder: I'm 99.9 percent sure it said "Партия Регионив" on the bag - a Russian transliteration from Ukrainian. As I said, I'm not 100 percent sure, but I did look very hard - so hard that Marta managed to run off to the other end of the cafe - and I also noticed that either "Donetsk" or "Donbass/Donbas" was written over the map of Ukraine, which probably means that he got this bag from the party's regional office. So now I'm wondering if I was hallucinating, or if it's indeed true. Hilarious if it's true, and could also serve as an example of linguistic "accommodation/non-accomodation" that my friend, Laada Bilaniuk, had written a paper on. Or not, I don't know. Either way, if any of you have ever seen this strange bag, too, please let me know :)

- Sometimes we get phone calls from opinion pollsters here. I usually tell them I'm too busy, apologize and hang up. But today Marta was giving me a hard time, and I thought it'd be nice to talk to a real human. The guy had an accent (who doesn't), and when I asked him what company he represented, he said simply: "A public opinion research company." I asked him to specify, and he sounded surprised for a moment, but then gave me some abbreviation, which I then googled but didn't get any results. Anyway, we moved through the local and national elections questions pretty fast, because all my answers were negative (except for the one about my voting preferences if the nationwide election were to be held now - he named the options, and I picked the now-dissolved SPS, just for the hell of it). He then moved on to the household income questions - and the first two options he gave me were quite wild: (a) You can barely afford to buy food; (b) You can afford food, but that's about it. I should've listened to the rest of the options, but I didn't. He also asked for my name, and I said, "Please."

- Marta is now posing this question to all cab drivers: "Where are you from? Hey, where are you from?" It made an Azeri cab driver laugh the other day - but it definitely freaked out the two Slavic-looking ones we had today. She learned it from me, of course: my favorite question, it allows me to determine in which language I should thank the driver who doesn't look local.
4 comments:

Told a middle-aged Georgian cab driver today that I knew only one word in Georgian: madlobt - thank you. He sighed and said that he'd soon turn into a one-word-in-Georgian person himself: "Been here far too long." I asked if he missed Georgia, and he said he did miss things from his childhood a lot.
1 comment:

My bookmarks have stopped updating automatically, and I can't find a way to fix it. Maybe it'll force me to actually write more here.

Marta's been giving me a really hard time lately - our angel turned into a monster practically overnight a week or so ago. I've read somewhere that it's common when a kid is 3 years old. I'm trying to be patient, but it's not easy.

As always, I'm reading tons of stuff on politics in Ukraine and Russia, and most of it is leaving me speechless. Maybe it's time again to start pretending I'm just a tourist here - because I miss being talkative/writative.

It's past 6:30 AM here in Moscow, snowing. There is an old Zhiguli parked across the street, a gypsy cab with (most likely) an Azeri driver sitting in it, waiting. And there is a man at a trolleybus stop, also waiting, just a few meters away from the cab. And here comes the trolleybus, the first one today, I guess. The man is gone now. And I'm done with my cigarette and am off to bed. Good night. Good morning.
2 comments: 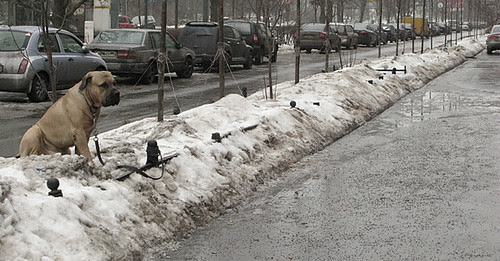 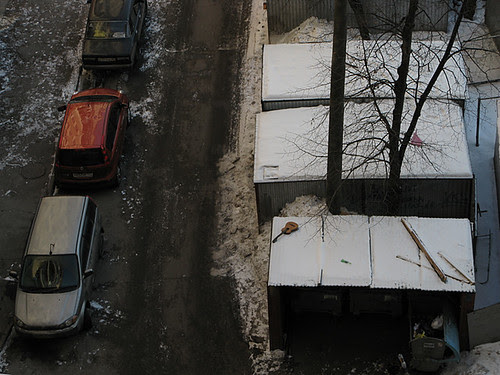