I've just spent over half an hour watching an absolutely awesome bus rescue operation on our narrow street.

Two guys - I guess they were just two random guys, neat, casually dressed, driving home from some party perhaps - directed two buses that were unable to pass through a curved segment of the road.

The two guys dismantled and dragged away part of the pavement border - large, heavy stones that would've damaged the buses - and then they were yelling directions to the bus drivers - and also making sure that the numerous cabs and other vehicles driving past them up and down the only available - and curved - lane didn't collide...

First one bus, then the other. 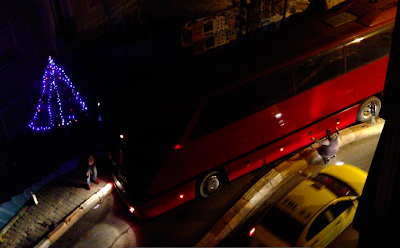 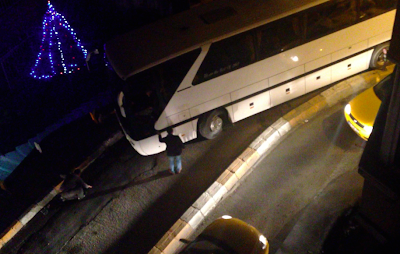 Then they spent 15 more minutes putting the pavement border stones back. They probably didn't have to: there's some construction going on here, they could've left the mess for construction workers to clean up tomorrow - but they didn't.

Somewhat sad that none of the cars driving by stopped, that no one got out to help these guys, but it doesn't really matter: there was more than enough brotherly spirit, definitely much more than I've seen back in our part of the world in a long time.

I wasn't the only one watching the operation: an upstairs neighbor smoked four cigarettes while the first bus was being led to freedom - I saw the butts fly down past my window, all four of them.

I was filming it all, but I doubt I'll ever post this footage anywhere: too long, too dark - and I've already killed all the suspense. Those guys are heroes, period.

Istanbul's random, unsung, anonymous heroes. If I were a guy, I'd like to be like them :)
No comments: