July 15 is supposed to be a very happy day, and I was doing my best to feel happy yesterday, tried very hard to fend off the sadness, to postpone it for just one day. 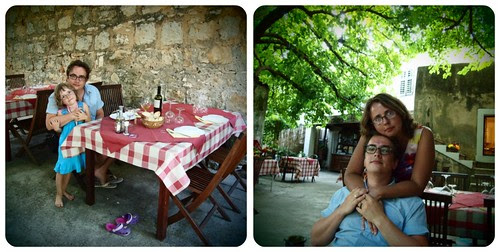 Today, a swallow flew into one of our windows in the morning, crossed the room, nearly colliding with me, and flew out of the window on the other side of the room. It didn't seem to panic - maybe it wasn't the first for it here - and I thought it was a good sign, because birds are cool.

I went for a long walk in the afternoon, up a mostly narrow path high above the sea, where the hot air is filled with the amazing smell of rosemary and pine trees, and the views are incredible, and there are no people around.

The two-hour walk was both exhausting and invigorating. I wish I didn't hate hats and wore one on this walk. But I never do. That's my only regret.

I kept thinking about papa, about his long last walk somewhere in the forest and in the fields, in the summer heat, lost, four years ago.

I kept thinking of how good it was to know where I was and where I was going to and why, to know the way back, to know that Marta and Misha were waiting for me at the beach, to have my cell phone with me, just in case. It was good to remember that I had the keys to our apartment with me, and that I had to turn around and walk back eventually because of that. It was good to know exactly who I was, to remember my name, age and all, as well as today's date, despite some lightheadedness caused by the heat.

I felt grateful for all this routine knowledge that kept me safe during this walk.

And I hoped, the way I always do during my marathon walks, that my father was somehow there with me, in awe of all I was in awe of. 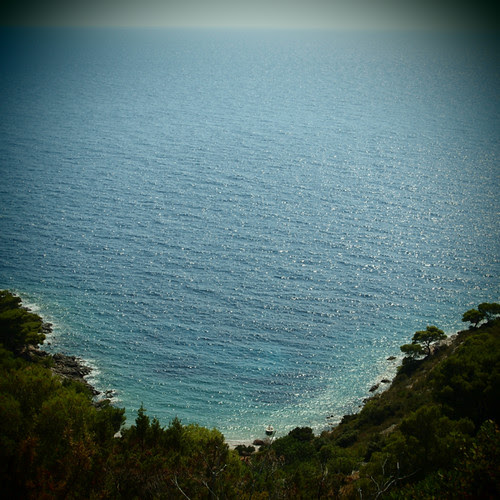 The wonderful town of Vis, a 15-minute ride away from Komiža - no way to walk there, though, because of the mountains:

I've already seen two broadcasts from the Croatian Parliament (Hrvatski sabor), and, boring as it may be, I've still caught a few interesting things.

During today's session, for example, they were voting for something, and I really liked their procedure: the speaker (or his deputy or whatever) stood by the microphone, calling each MP's name - and each MP present then responded with a loud "za" or "protiv" (for/against). There was no sound from those who were absent, obviously - though when ex-PM Ivo Sanader's name was called, there was a cheerful, noisy reaction from some MPs (Sanader has been in an Austrian prison on corruption charges since Dec. 2010). After the vote was completed, the speaker read the names of those absent once again, to make sure they were actually not there. And then they counted the votes.

Such a lo-tech, uncool procedure, right? But so much more efficient than the relatively hi-tech one that we have in Ukraine, which allows our assholes to cheat like crazy (see this GV text by Tetyana Bohdanova on one really embarrassing episode of cheating, witnessed by a Polish delegation - and the video of it is below).

UPDATE: A local friend has just explained to me that this lo-tech voting system is normally used in special cases, while the routine voting is done electronically, just like everywhere else.

Yesterday's vote for changes in the war veterans' rights legislation failed - they needed 102 votes in favor of it, but only 101 MPs were present - and there was no space for them to cheat in, even if they wanted to. (An item about it in English is here, with a mention of the laughing caused by Ivo Sanader's name being called.)

Meanwhile in Ukraine, they've passed the pension reform, and the voting was done the usual, backasswards, way, of course. Here's what LEvko of Foreign Notes wrote about it:

Today, [Friday] laws on pension reforms which will directly affect the lives of every Ukrainian citizen, were passed in parliament. Now every Ukrainian will have to work several years longer before achieving retirement.

248 deputies voted in support of the motion even though it seems only 143 deputies were actually registered to vote in the parliament building.

Multiple voting by deputies is a blantant contravention of the country's Constitution, but takes place with numbing regularity. [...]

LEvko also wrote about Yanukovych's reaction to being told that his son had been caught voting for other MPs:

[...] Also today, President Yanukovych, who is 'Guarantor of the Constitution', was asked at a press conference why his younger, parliamentary deputy son, Viktor, had voted in the past in parliament for other deputies in their absence, thus contravening to the Constitution.

A few bunches of last week's pictures, from Split and Komiža (no time to write anything):