[I need more space than Twitter and Facebook are giving me. More air. I'm tired of counting characters and words when I write. I need to relax. That's why I'm back here, at least for a while.]

In the afternoon, I read this Ukrainska Pravda text [ukr] about the crazy mess on Trukhaniv Island, where the Euro 2012 camp for Swedes is (or was?) supposed to be. There're enough shocking pictures in this text to make everything clear for those who don't read Ukrainian.

Then I saw a couple of people discussing the text on Facebook, including a Swedish friend of ours. And when I went outside, I took a picture of the Swedish Corner on Khreshchatyk for him: 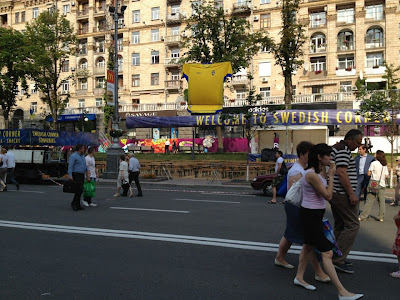 (As far as I can tell, everything looks okay inside the Khreshchatyk Fan Zone so far. Especially if you compare it to the rest of the city.)

Anyway, then I decided to walk to Trukhaniv Island, hoping to see something at least a little bit different from what the Ukrainska Pravda reporters had seen.

Unfortunately, everything did look pretty terrible. The camp's opening is scheduled for June 7 - but there's too much construction still going on to consider the place livable.

Right after I crossed the Pedestrian Bridge, the sky turned black and it started raining, so I had to run for shelter to the only place nearby that had some roof and some walls around it. I spent over an hour stuck there, listening, among other things, to bits of conversations of some nervous, skinny construction workers.

I have a feeling that they and their bosses are somewhat nervous, while the bosses' bosses aren't - because if the Swedes don't show up, the money saved on this pseudo-construction project would feel even safer and more comfortable in their pockets than it is now. No man, no problem. But it's just a feeling that I have. (Oh, and how does this booking thing work? Is there a way for the Ukrainian side to keep the deposits that the Swedes pay even if they find the conditions unsatisfactory and refuse to stay there? Do they get their money back? I hope so.)

When the rain was over, it was already past 8PM, and it was a bit too dark and a bit too cold to walk around the place.

Some pictures are here, with a bunch of my comments.

And here're my tweets from the cafe where I was hiding from the rain:

Huge, scary thunderstorm got me stuck at a shitty little drinking hut by the Pedestrian Bridge at the so-called Euro-Camping for the Swedes.

If I were a Swede, I'd go elsewhere. No camp here, no facilities, no easy way to get in or out. No wifi. Stinky mess & construction.

Ukrainians are brave. Lightnings are striking right next to us, but a couple dozen folks stand outside, smoking. I wouldn't mind a cigarette

No bathroom at this cafe, of course. A girl who asked the bartender was pointed outside, some drunk told her that "toilet's all around you."

Still raining, I'm still stuck at Trukhaniv :) Not much fun. Other people are drinking, I'm not. All in all, a hopeless place.

"Swedish Camp" construction guys are skinny, look like Kyiv's average drunks. Curse a lot, under much pressure, now that time's almost up.

Taking shelter from the rain at Trukhaniv Island: 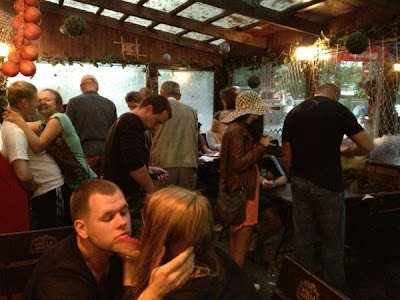