Here's something to encourage myself to get up and go to the polling station:

Refat Chubarov, #111 on the United Opposition list, speaking Crimean Tatar, Russian and Ukrainian in the Crimean Parliament. I wish more of our politicians were like him.

Such a shame that he's #111, he should be much higher up - he has to be in the Parliament - and so I've decided to vote for the United Opposition because of him - and not for Klitschko's Udar - to help him get in.
No comments:

Too many elections since 2004 - since Maidan - but not much effect.

Interesting to think of how optimistic some of us were eight years ago.

Sad to think of all the crushed hopes - especially the hopes of those of us who were more idealistic and naive than others.

Frustrating to think of the incurable public amnesia that we seem to be infected with - we keep voting for exactly the same people, keep pretending to expect them to deliver on the promises they've been making for the past 20 years or so, conveniently forget (or pretend to) about these candidates' faults ahead of each new vote.

Would be great to be able to revert to one's 20-year-old self every time there is an election here: the results are likely to be rigged and protest would seem like the only decent option - and the "younger generation" is so much better at dealing with it than the rest of us (until most of them turn into "the rest of us" themselves, that is).

In the past eight years, however, we've seen far too many 20-year-olds taking part - for a fee - in staged protests, and maybe I should finally stop generalizing about and idealizing those "new kids on the bloc"...

A strong sense of déjà vu: I've come to Kyiv to vote - will stay for two weeks or so. In 2004, I also came to Kyiv for just two weeks, but ended up staying for two months. This time I'll go back as planned.

History repeats itself, first as tragedy, then as farce: not sure about the "tragedy" part, but there's been plenty of farce lately.

The latest farcical episode - which reminded me of our seemingly legitimate fears eight years ago - features the arrival of tanks and other military vehicles at Maidan last night, a day and a half before the vote. There was some initial outrage on Facebook and elsewhere, until someone reported that the tanks were old, that they were part of a WWII-related exhibition. Then some folks chose to ignore common sense and went on screaming about the imminent bloodshed - while others discussed the all-too-obvious symbolism and timing of these antique tanks at Maidan, and the message that the bastards up above seem to be sending to the masses: don't even think of coming to Maidan with your protests on Sunday. 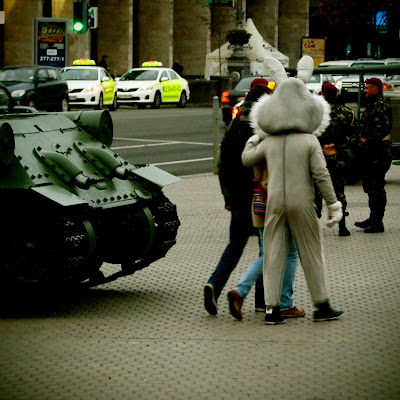 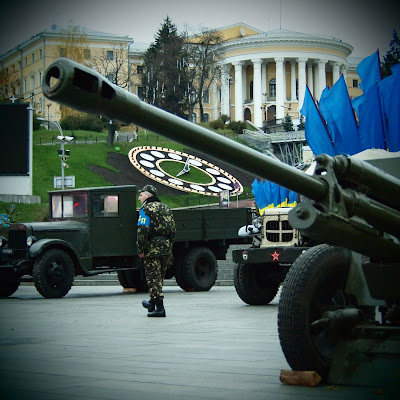 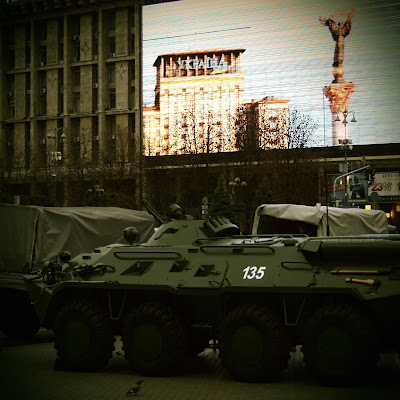