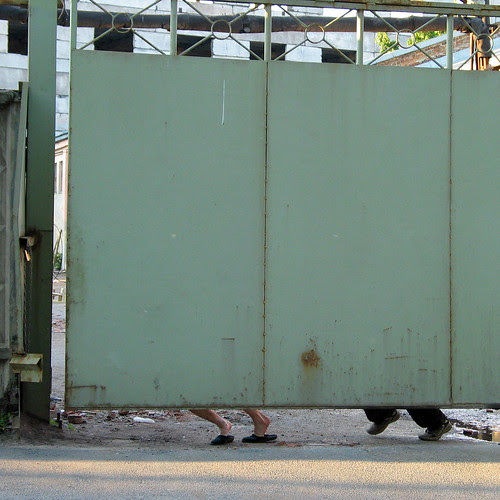 What I really miss now is having the time to walk around, taking pictures - and having the time and energy to post those pictures afterwards, and even to write something about them...
No comments:

In between everything else (and that's A LOT right now), I'm reading this wonderful book about languages - The Unfolding Of Language: The Evolution of Mankind's Greatest Invention, by Guy Deutscher.

One of the first examples in this book comes from Turkish - an illustration of one of the "many exotic and outlandish features" of foreign languages (p. 2):

[...] The Turkish word şehirlileştiremediklerimizdensiniz, to take one example, means nothing less than 'you are one of those whom we can't turn into a town-dweller'. (In case you are wondering, this monstrosity really is one word, not merely many different words squashed together - most of its components cannot even stand up on their own.) [...]

I've already seen something similar in one of my (many) Turkish textbooks - which promises to teach you Turkish in three months, but just scared me away by providing the following two "monstrosities" in Lesson 1, Part 5, which deals with seemingly innocent "vowel harmony":

Değiştiremediklerimizden misiniz?
Являешься ли ты одним из тех, кого мы были неспособны изменить?
[Are you one of those whom we've been incapable of changing?]

Avrupalılaştıramadıklarımızdan mısınız?
Разве ты являешься одним из тех, кого мы не смогли европеизировать?
[Aren't you one of those whom we haven't been able to europeize?]

Two more quotes from Deutscher on crazy irregularities in other languages - hilarious, got me laughing out loud, which doesn't happen all too often now, and that's why I have to preserve them here, for future reference... :)

[...] Native speakers may be blithely unaware of the chaos that reigns in the English verbal system; not so anyone who has had to learn it at school. Here is a rhyme I wrote in memory of my frustrations:


The teacher claimed it was so plain,
I only had to use my brain.
She said the past of throw was threw,
The past of grow - of course - was grew,
So flew must be the past of fly,
And now, my boy, your turn to try.
But when I trew,
I had no clue,
If mow was mew
Like know and knew
(Or is it knowed
Like snow and snowed?)
The teacher frowned at me and said
The past of feed was - plainly - fed.
Fed up, I knew then what I ned:
I took a break, and out I snoke,
She shook and quook (or quaked? or quoke?)
With raging anger out she broke:
Your ignorance you want to hide?
Tell me the past form of collide!
But how on earth should I decide
If it's collid
(Like hide and hid),
Or else - from all that I surmose,
The past of rise was simply rose,
And that of ride was surely rode,
So of collide must be collode?
Oh damn these English verbs, I thought
The whole thing absolutely stought!
Of English I have had enough,
These verbs of yours are far too tough.
Bolt upright in my chair I sat,
And said to her 'that's that' - I quat.

And German (p. 43) - via Mark Twain's A Tramp Abroad, "an appendix entitled 'The Awful German Language'":

[...] Twain could not understand why, for instance, German rain should be a 'he', a German fishwife should be an 'it', and a German fish-scale a 'she'. So after a few more pages of rant, he went on to recount the following touching 'Tale of the Fishwife and its Sad Fate', purportedly translated literally from the German:

It is a bleak day. Hear the rain, how he pours, and the hail, how he rattles; and see the snow, how he drifts along, and of the mud, how deep he is! Ah the poor fishwife, it is stuck fast in the mire; it has dropped its basket of fishes; and its hands have been cut by the scales as it seized some of the falling creatures; and one scale has even got into its eye. And it cannot get her out. It opens its mouth to cry for help; but if any sound comes out of him, alas he is drowned by the raging of the storm. And now a tomcat has got one of the fishes and she will surely escape with him. No, she bites off a fin, she holds her in her mouth - will she swallow her? No, the fishwife's brave mother-dog deserts his puppies and rescues the fin - which he eats, himself, as his reward... [...]

The "audit" scandal - crazy, in many ways, including this (Kyiv Post):

[...] When asked how much tax payers’ money was and will be spent on the U.S. lawyers and investigators, Plato Cacheris with Trout Cacheris law firm said “it was much less than the money stolen” and would not elaborate further.

In turn, Ukraine’s Finance Ministry also refused to reveal any details, calling it a commercial secret.

A senior government official told the Kyiv Post that $2 million in state budget funds had been spent on the first stage of the audit.

The official, speaking on condition of anonymity because he was not authorized to comment on the issue, said the aim was to recover a sum up to 100 times larger than the firms’ fees.

The official added that two further stages of investigations are planned, which will cost roughly the same each.

“So far we have done what we needed to. But there is a high possibility the Cabinet will ask us to do some other things,” Cacheris told Kyiv Post.

After the murder of journalist Georgiy Gongadze, Kroll was hired in 2001 by then-President Leonid Kuchma’s son-in-law Viktor Pinchuk to probe the case. In the end the firm issued a report saying Kuchma wasn’t involved, which was widely viewed an attempt to absolve him from suspicion arising from alleged discussions he had with senior officials about dealing with the journalist.

Akin Gump lawyers have also had experience working in Ukraine.

At times these firms have pressured investigative journalists who write stories about both Ukrainian businessmen by threatening to file lawsuits against them. [...]

A chess game at Shevchenko Park: 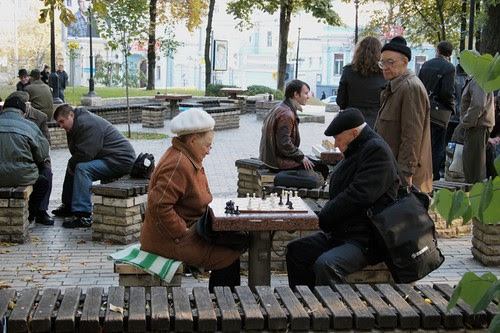