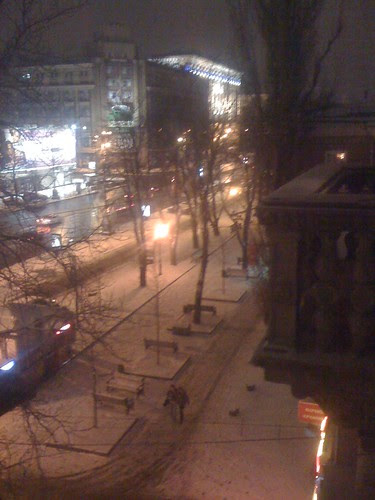 Friday night, Khreshchatyk, mild traffic, limos drive by every now and then. Hosni Mubarak resigned a few hours before. Ukrainian politicians are done TV-fighting over whose fault it is that the country's facing a shortage of buckwheat.

A young couple is hugging and kissing on the snow-covered part of the sidewalk. Suddenly, they both fall down - fresh snow conceals fresh ice underneath. They don't bother to get up. Instead, the girl climbs on top of the boy, and they lie like this for at least 15 minutes, kissing and petting.

Cars keep driving by. A few cab drivers sit inside their vehicles nearby. A few men walk past the couple, staring at them intensely, but not interfering. A police jeep is circling the neighborhood, but it never approaches the couple. By the time it re-appears for the fifth time, the couple seems to be asleep. Or frozen to death.

The couple's friends - a whole bunch of them - are drinking on one of the benches in the chestnut tree alley, some 50 meters away. One of them finally comes up to the couple, gets the girl off the boy, drags both of them up - but they aren't able to maintain a vertical position for longer than 15 seconds. The boy is a lot drunker than the girl, and he's much bigger, too. Their friend spends the next ten minutes trying to lead the couple back to the bench. They keep slipping and falling, slipping and falling, all three of them.

The helpful friend gives up eventually, leaving the couple by the bus stop, ten meters or so away from the bench.

They manage to get up by themselves, and they even make a quick attempt to have some sort of a conversation. As soon as they start kissing, though, they fall down again.

I watch them from my window until my feet turn cold. I leave for my room when the girl joins their friends - while the boy comes up to a car parked on the sidewalk and pees generously on it. 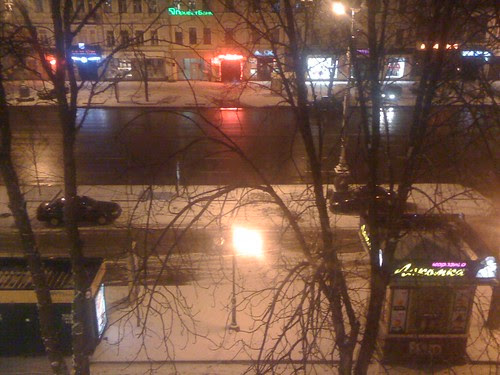 It's like watching a silent movie, so I keep thinking of an appropriate soundtrack for it. Gogol Bordello's Start Wearing Purple is the best fit I can think of.

An hour later, I'm at the balcony that faces our crazy Besarabka backyard - and guess what I see?

A different young couple is down on the ground, the boy is on top of the girl this time, she is struggling to get him off her, cursing at him, and he's cursing back at her. (This time, from the balcony, I can hear them really well.) She kicks him hard with her leg, he curses some more and gets up. He looks frustrated, but successfully fights off an urge to push and hit the girl as he helps her to get up. She's all dressed up, wearing high heels - and she looks and sounds quite furious. Like the first couple, these kids are very, very drunk. And the backyard is even more slippery than Khreshchatyk. They walk away unsteadily, still cursing at one another. The boy, quite traditionally, carries the girl's tiny, very feminine handbag - but since there's no longer any use pretending he's a gentleman, he's swinging that handbag madly as he walks. 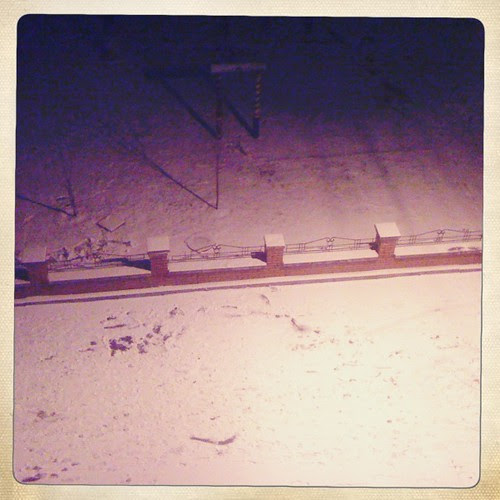 Hard to believe it hasn't even been three weeks yet since we returned from Istanbul.

All day today I was having flashbacks to Jan. 15, when we all went to Bebek, and, once there, I left Marta and Misha at the playground by the Bosphorus and set off for a long walk.

This walk consisted of much climbing, getting lost somewhere around Bebek Dağı Sokağı, running into the Boğaziçi Üniversitesi that, if I remember correctly, a dear friend of mine attended back in 2002-03, then finding my way out again and descending down Günaydın Yolu back to the Bosphorus minutes before the sun disappeared behind the hills.

It was such a nice walk - I felt so free that day! - and I longed to look at the pictures today, but the way I store them is kind of messy, and I've only gotten through to them now. Below is a pretty random selection, and it doesn't reflect the beauty of that walk or anything else about it at all - and yet it feels good to have these pictures within reach somewhere... 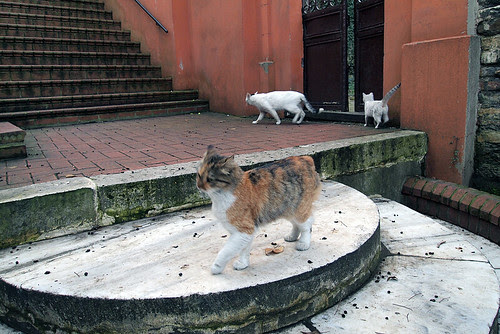 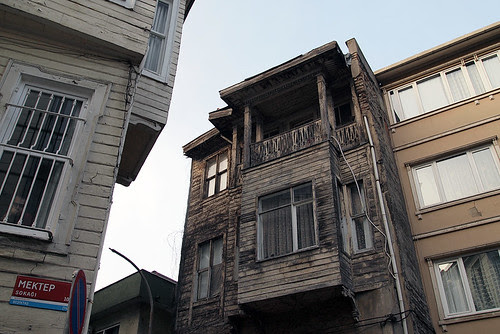 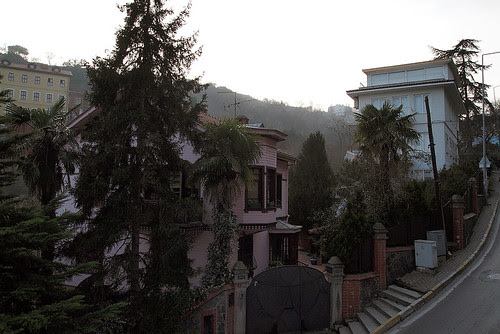 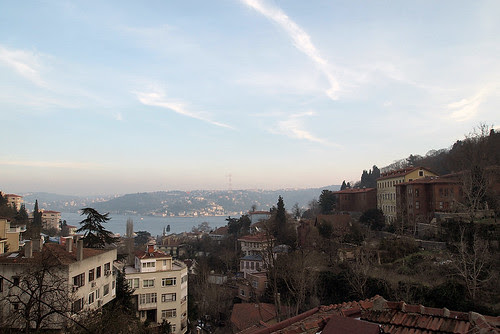 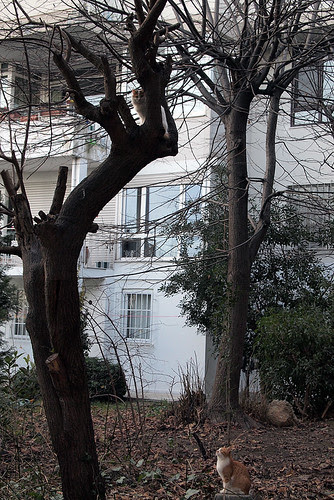 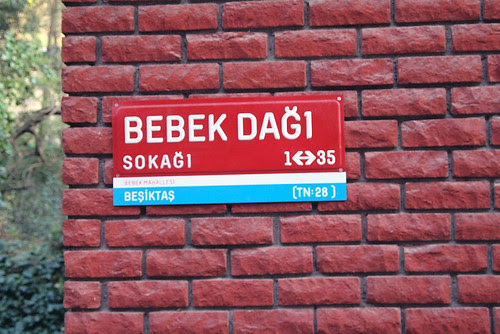 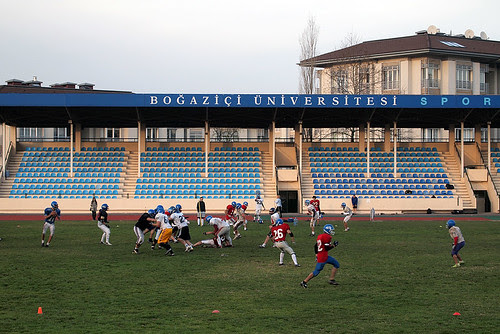 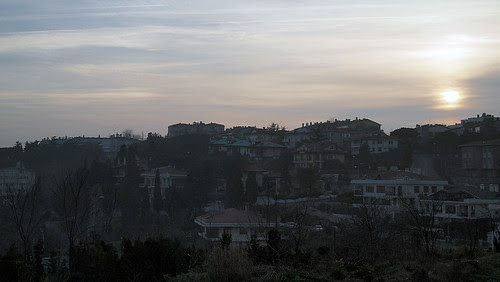 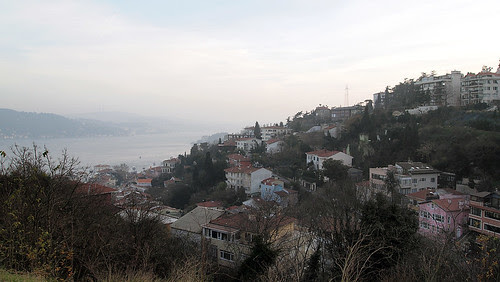 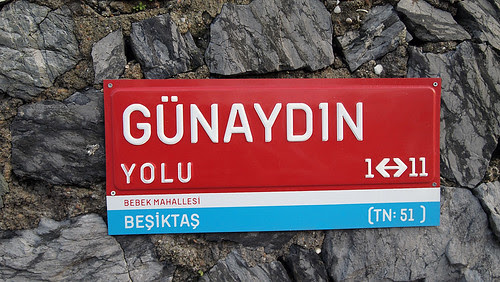 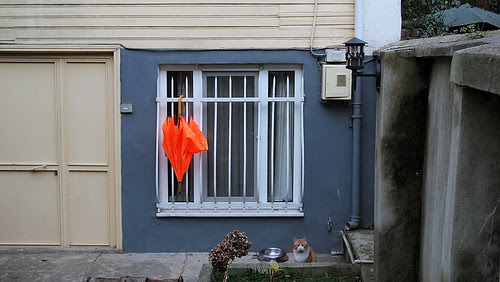 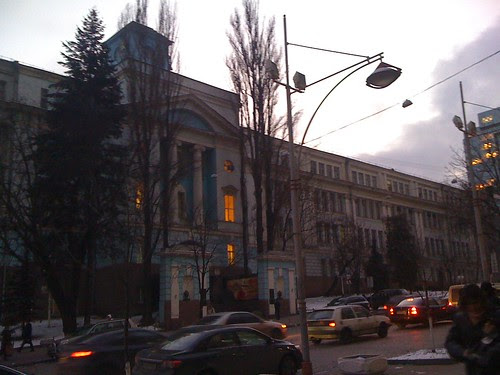 “Say hi to the dinosaur,” mama tells us as we set off for the Natural History Museum (or whatever it's now called in Kyiv). Her memories of this museum must be fresher than mine: I haven't been to it since I was a kid, while she used to take children there when she worked at school in the late 1980s-early 90s.

On the way to the museum, we stop a few times and I take some pictures. The ugly new thing at Teatralna that's being built where it doesn't belong. A rather beautiful old building across the street that looks deserted and about to collapse. But there are six satellite dishes on its facade, and there's light in many of its windows at night, and I've no idea if it's home to some homeless now, or to some more legitimate residents who are waiting for it to be refurbished and fixed. I explain to Marta, as simply as possible, why I'm taking pictures of these two structures, each gut-wrenching in its own way. 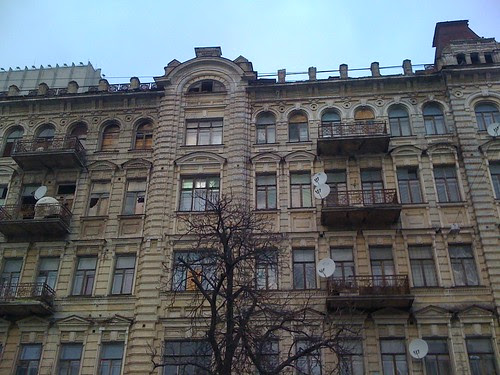 At the museum, the huge animal skeletons I used to be so impressed with as a child aren't all that huge anymore: I have grown, they haven't. The butterfly collection - something that I've remembered all these years - is still there. I keep looking for the dinosaur, but fail to find it: mama must have meant the mammoth. 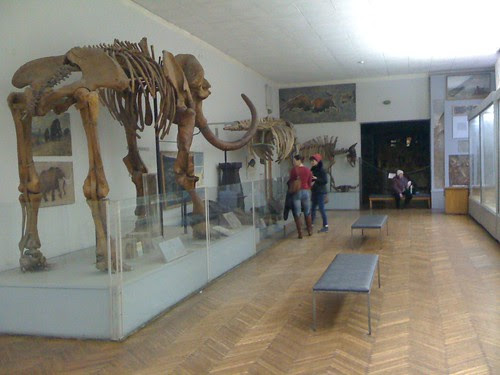 Nestled underneath the skeleton of some huge, long-tailed sea creature, there's a dusty but neat scale model of the never-built Paleontological Park: 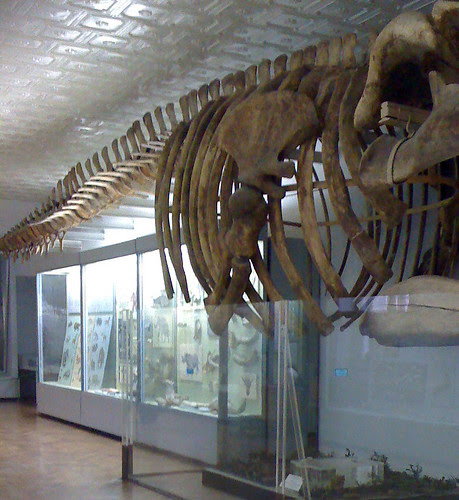 An elderly museum employee tells us that this construction project had been given up in the early 1990s - due to lack of funding, of course.

She then begins to follow us around, talking about things that everyone here seems to be preoccupied with: our dim-witted president, and his allies' notorious destruction and construction projects, including the one down the street, at Teatralna. She talks of her post-WWII Kyiv childhood, describes their cozy courtyard just off Maidan, and a little fountain that used to be there - but is now replaced by a tall new building that, of course, doesn't belong there.

She says she used to work at some “enterprise” - until they fired half of their workers. She found a job at this museum, while her friend went to work at one of Lavra’s (secular) museums - and is about to be unemployed again, because it looks like the current regime is shutting those Lavra museums down.

This museum isn't likely to last much longer, either, the woman tells me.

I hope she's wrong, but I won't be surprised if some fancy shopping mall does move in here, sooner or later. It's a huge building, but much of their collection is housed in the long corridors, and it's obvious that they do need more space, which could well be used as a justification for moving it elsewhere, to a less lucrative location.

So here is a Flickr set with some more pictures (lousy, taken with my iPhone) of this dinosaur (or mammoth) of a museum.

Now that I'm no longer a kid, what impresses me most here is this well-preserved - yet neutered, impotent - Sovietness. No one is consciously trying to recreate the atmosphere of that extinct country here, there's no Soviet propaganda left (and even if there is some, it no longer serves its purpose), but they lack money to modernize the place, and, perhaps, this isn't a bad thing, if it allows you to have such a wild time-travel experience. Because it is absolutely awesome to suddenly find yourself in a place that's as close in spirit as it gets to Eldar Ryazanov's Garage movie set - among other things. 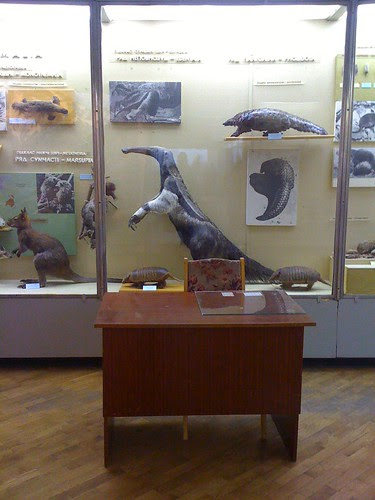