This past Friday - Friday the 13th - I went to the employment center on Zhilyanska and Gaidara to have them certify that I'm not getting any unemployment assistance from the state. I don't know that area at all, so I got lost and ended up asking a drunk - a professional drunk, I should add, not some amateur - for directions: at first, I didn't trust him and almost walked away when he told me to follow him, but then I realized he had no evil intentions and was indeed trying to help me. I apologized and wished him a happy new year, and a merry Christmas, and a happy "old" new year, and we parted as friends, almost. "Did you really think I was going to rob you?" he asked me cheerfully at some point along the way.

I had imagined the employment center to be some miserable shack, and I had also expected to see the dirty-faced unemployed crowding in front of it (you know, like those construction workers from Ukraine and Central Asia waiting for potential employers on the side of the road just outside Moscow). That was probably why I turned to a drunk to show me the way. But the employment center turned out to be a modern building, very presentable, and they had very presentable leaflets and brochures inside on how to launch a successful career, and it took them less than five minutes to issue me my piece of paper, and it didn't feel like Ukraine at all there.

Zhilyanska and Gaidara looked rather gloomy, even though a very nice area of Tarasivska and Tolstoho isn't far away. Neither are the Botanical Garden, and the Shevchenko University. That was my first real walk without Marta (Mishah walked with her on his own that day), so I took some pictures the old way, without having Marta's stroller in the foreground on nearly every one of them.

I posted these pictures yesterday night - here - and this morning I read in the news that this whole area - Zhilyanska, Saksahanskoho, Volodymyrska, Tarasivska, Gaidara and Tolstoho - had their central heating turned off around 11 pm, just as I was posting my pictures. Some ancient pipe must've burst there and 26,000 people are reported to have been affected as a result (19,000 residents of 105 residential buildings, two medical and 11 educational institutions, and over 70 office buildings). They are supposed to get their warmth back only now, around 6 pm Thursday. Poor, poor people.

Update: Now they are promising to fix that pipe by 8 pm... (via a Korrespondent.net piece, in Russian) 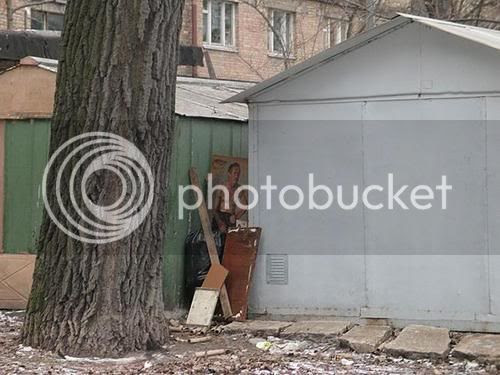 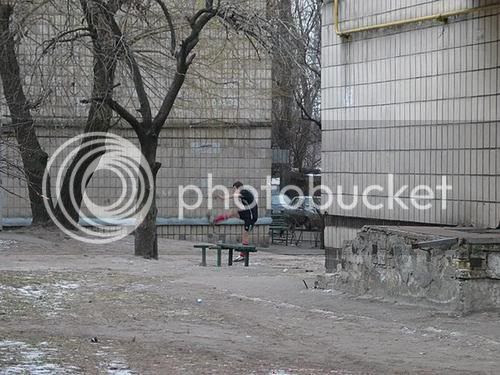 (This boy was playing football with just his shorts on - and believe me, it wasn't hot on January 13, either.)

That area is very close to where we live, so I'm incredibly happy we bought an electric heater yesterday. With central heating alone, the temperature in the room Marta and I are in never gets higher than 19 degrees Celcius, even when it was still comparatively warm outside.

I just hope they won't be shutting off central heating and electricity simultaneously.