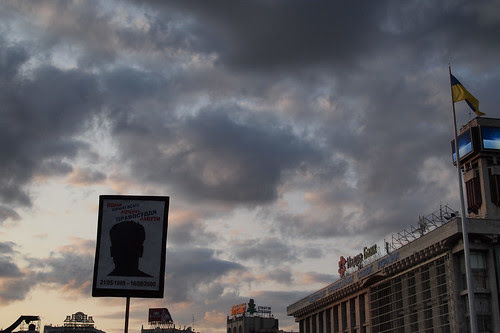 I keep thinking of Kyiv's size, of the fact that there are nearly as many people in this city as in the whole country of Croatia.

And at Georgi Gongadze's memorial yesterday there were many people - more than last year, I've been told.

Two hundred or so, including journalists, according to TSN.ua.

The day before, crowds of football fans flooded Kyiv's center on their way to the Dynamo Stadium. Thousands of them, it seemed.

And yesterday, a bunch of people walked slowly uphill from Maidan to the Presidential Administration building, with candles, chanting occasionally. A bunch that seemed both numerous and tiny, depending on what you compared it with. Angry honking from an asshole cab driver riding behind this group - a needless reminder that there were way more people in this huge city who couldn't care less.

(A few of my pictures from the event are here.)

While still at Maidan, I eavesdropped on a TV journalist carefully correcting an elderly woman she was interviewing: "Yes, but perhaps low pensions in Ukraine isn't what has brought you here today?"

Up at Bankova, as the names of the 63 journalists who lost their lives in the 20 years of Ukraine's independence were being read, Kuchma's ex-guard Mykola Melnychenko was rambling about something, looking very important, in front of a bunch of TV cameras.

A few dozen meters away, three or four Chernobyl liquidators lay on the ground, hunger-striking, irrelevant.

"Ты никому не нужен" - "No one needs you" - read a stencil near St. Sophia's Cathedral that I took a picture of earlier that day. Exactly. 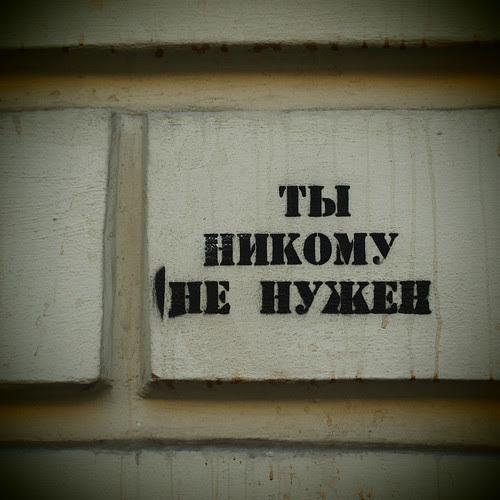