A pile of crumpled newspapers lay in the corner of our shitty elevator today. Not even newspapers, but those free ad things, the "spam" that's being regularly delivered to our mailboxes.

I glanced at them - and then again, more carefully. I had just voted for Tymoshenko - and now I was seeing her name, along with the words Vybir 2007 ("The choice of 2007") at the unlikeliest of places. It was really eye-catching, despite the ad's really tiny size and the elevator's dim lighting:

This is the most hilarious Yulia's ad I've ever seen - because it's not. And it is.

It's actually an ad for a bathroom/kitchen utilities store (santekhnika) - located ... ha-ha ... on vul. Tymoshenko, 19 - a street named after Marshal Tymoshenko: 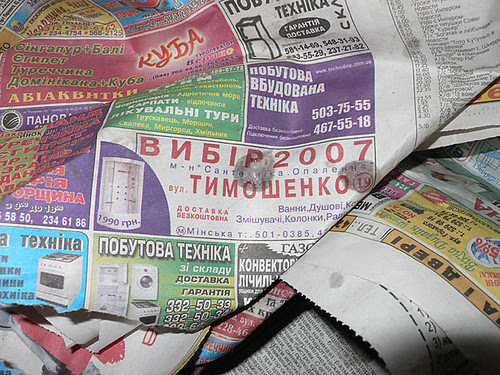