On Nov. 30, the last day of my pregnancy, Mishah took me out for a walk to the park a few blocks away from the hospital. We had been there the day before and came back again not because the place was anything special, but because I really wanted to get sick and tired of all this walking, so that I didn't miss it when the baby arrived and I was stuck at home, nursing and waiting for appropriate weather to venture outside. I savored these walks, despite having to pull up my pants after every other step I took.

It was roughly 18 hours before my c-section when we saw this sculpture of a young guy and a girl, sort of pretty, but looking overly enthusiastic in a very Soviet way: 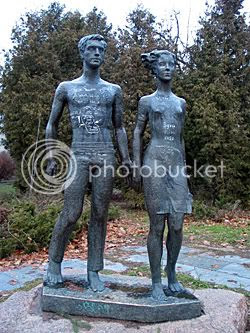 All kinds of things were written all over their darkened bronze bodies, and we decided to have a closer look. In addition to curses and other such stuff, both figures had names painted in white on their foreheads: the boy was Zhenia, and the girl - Marta! 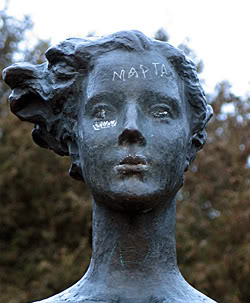 People keep asking why we chose to name our daughter Marta. My dear friend has told me today his mother asked him, too, and he replied that Veronica had seen this name written on the forehead of a park sculpture, that's why.

It's not, of course. Nor is it because I got pregnant in March (mart in Russian), as someone else concluded.

A shortcut explanation for the name choice is this: 'Marta' sounds beautifully on its own as well as with Mishah's last name, Smetana (translated as 'sour cream').

The real reason, though, is Martha Gellhorn, an incredible war correspondent, an incredible woman, whose work I was reading in St. Pete in spring 2004: I remember very well how I walked to the other room at some point and asked Mishah if he liked the name Marta. He said he did. 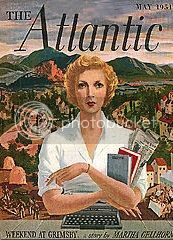 The problem is very few people know anything about Martha Gellhorn, and it usually takes awfully long to explain why she's so cool I've decided to name my daughter after her: how she started her career in 1937, covering the Spanish Civil War, and finished it in Panama at the age of 81, in 1990, covering the U.S. invasion; how a few years later she admitted she was too old to go to Bosnia; how she was Ernest Hemingway's third wife and he was her second husband, and how she was his only wife to dump him before he did (the nurses back at the hospital used to roll their eyes a little at this point)...