City council election campaign is in full swing in Bashkortostan's capital Ufa: the vote is scheduled for June 26, and a scandal spectacular enough to be featured on nationwide TV has already broken out. (I watched it on either ORT or RTR a week or so ago, and then, this past Friday, NTV announced the story belatedly, too - but ended up never airing it, for some reason.)

Anyway, some 780,000 of Ufa's eligible voters received this leaflet in their mailboxes during the weekend of June 3-4: 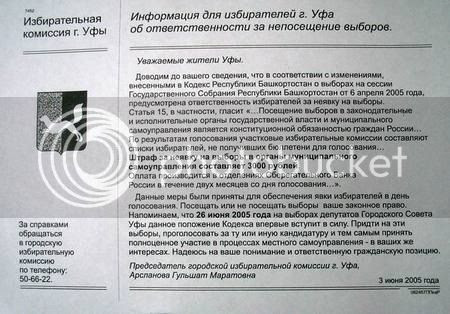 Among other things, the voters were being warned - in bold type and, allegedly, by the head of Ufa's Election Committee, no less - that if they failed to show up at the polling stations and cast their votes on June 26, they'd be fined 3,000 rubles (approx. $100). They'd have two months to pay the fine.

The TV story I was watching had this elderly woman in it - an average Ufa resident, I assume - who stood by her mailbox, holding a piece of paper and lamenting about the absurdity of the message it carried: how was she supposed to pay them 3,000 rubles when her monthly pension was only 2,000 rubles (approx. $70)?!

She didn't look like she realized there was no way anyone could force her to vote if she herself didn't feel like it.

If I were doing this story, I'd probably go searching for some ordinary citizen aware of how this election thing was supposed to work - to sort of show the other side's view as well as just out of curiosity.

Maybe the state-run channel's crew did try to find someone knowledgeable in Ufa but failed - or perhaps they didn't even bother.

After the elderly woman segment, they quoted the Election Committee's staff issuing disclaimers - and then, of all things, they interviewed a uniformed cop sitting at his desk in his study. The cop was stating the obvious: it is every citizen's right, not duty, to vote in all kinds of elections, and the information the leaflets contain is nonsense.

Maybe the journalists figured that no one was going to believe the truth about the election unless it was presented by someone with what's perceived as the real authority in this part of the world - a uniformed cop, of course, not a college student...

The punchline of this story, however, is that many Ufa residents first learned about the upcoming city council election from these fake leaflets - even though the competition seems to be pretty tough: 197 candidates for 35 seats!..

Another punchline is that, according to the Ufa edition of Komsomolskaya Pravda (in Russian), Bashkortostan had a really, really high turnout in the March 2004 presidential election: 89.9 percent.