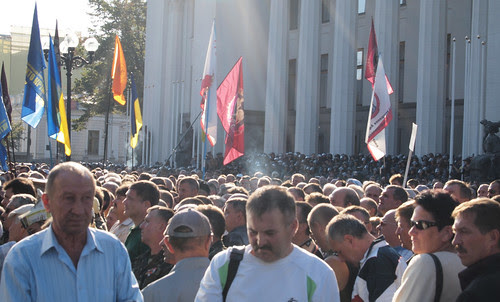 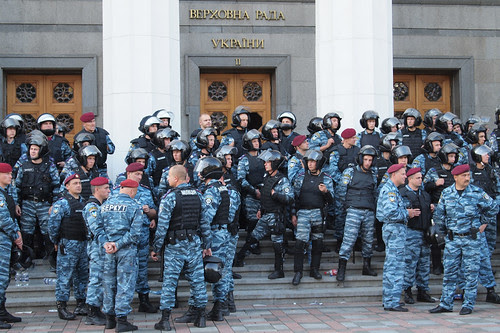 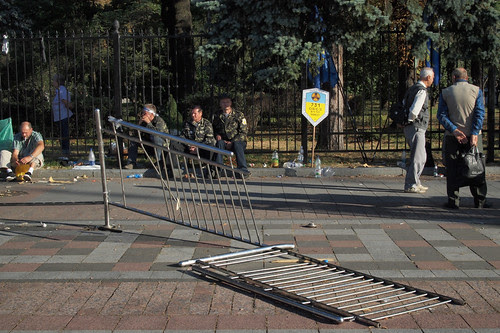 Most protesters at yesterday's rally by afgantsy, chernobyltsy and others looked like people who probably didn't own computers and definitely did not organize through Facebook or any other social networks.

There was no dance, song, music or pre-recorded speeches at this rally; there were many fatigues and medals, and at least one "Thanks to Donbass residents..." t-shirt.

The rally also included a rather successful storming of the Rada building (I, of course, missed it, but here are some photos and video from Ukrainska Pravda) - and this storming inspired the MPs to wait a bit with the legislation that would've cancelled benefits for the groups of Ukrainian citizens that the protesters represented.

It took just a few days for that lonely bunch of hunger-striking chernobyltsy by the Presidential Administration to evolve into a much more impressive entity. "Ты никому не нужен" ("No one needs you"), a line that seemed to be begging to attach itself to the image of that tiny, irrelevant group last week, has been replaced with "Никто, кроме нас" ("No one but us"), the Marines' slogan that one could hear occasionally by the Rada yesterday (as well as the name of an organization that seemed to be behind the protests: Всеукраїнська громадська організація «Ніхто крім нас» (НКН).

Here are all the pictures that I took: