According to Ukrainska Pravda (UKR), Victor Yushchenko said this on May 15:

Only occupiers, slaves and fools do not speak the national language.

Back in October 2010, I was somewhat surprised to see a variation of this quote - it had "a guest" instead of "fools" - at a small pro-Ukrainian rally in Kyiv: 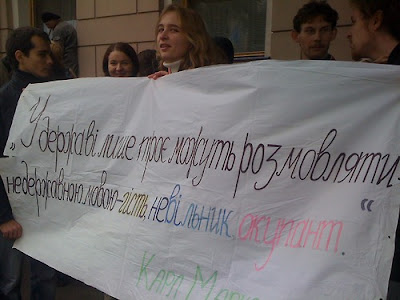 Back then, I was surprised because the quote was attributed to Karl Marx, of all people.

Here's what I wrote about it on my Tumblr blog (now deserted; three more pics from that rally - here, here, here):

[...] The quote on the poster that these young people are holding is allegedly from Karl Marx. The main idea of the quote is that it’s okay only for “a guest, a slave and an occupier” to be speaking a language that’s not the official language of the state they are in.

I think it’s ironic that they would need Marx to help them defend the Ukrainian language. A friend’s explanation that this is a neo-Marxist thing doesn’t make much sense to me. I even thought it was some kind of a joke that I didn’t get, but this friend of mine - a Ukrainian poet, among other things - doesn’t think so.

Before translating this quote here, I decided to search for the original - and ended up reading through a whole bunch of Marx & Engels stuff, for the first time in my life (I was a bad student back in the Soviet times when, I guess, we were supposed to read all that). I’ve discovered many interesting things (seriously) - but failed to find the source of the quote. Failed to find any mention of it in English, too.

Moreover, it seems to be only found online in the context of the ‘language issue’ in Ukraine. At least once, they used a variation of this quote at a pro-Ukrainian rally in Lviv. The wording differs from site to site, and a more democratic rendition says that those who cannot speak the state language of the country they are in are either guests, slaves or occupiers.

If there are any Marxists or Marx experts reading this, or just someone who is better at searching than I am, please help me find out whether Marx really said this and, if he did, where - and also what the original wording was. I’m really, really curious. [...]

And now I'm very curious again: who said it first - and how did the original sound???