I still haven't watched a single TV newscast - cartoons is all we watch here. And I still haven't been to Park Kultury or Lubyanka stations - I might go there over the weekend, with flowers. I've seen photos from the scene on the web, of course, but the only thing directly related to the tragedy that I saw firsthand were the white-and-green buses riding back and forth down our street on Monday morning - dozens of them, thrown in by the city to substitute for the disrupted subway service on this route. A shocking image to wake up to, partly because it reminded me of the 2002 Nord-Ost theater siege, when the same buses were lined up along Dubrovka Street, awaiting the release of the hostages.

Here's a picture that Misha took on Monday, as he walked to work: 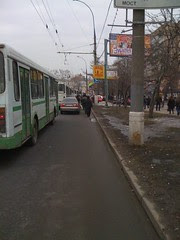 These buses, now and then - they are like visual bookmarks in my mind. And the story - it keeps getting recycled.

Once again, I've re-read what I wrote about Nord-Ost back then: most of it, though not all, reads smoothly, as if it all happened earlier this week - and it did, in a way - and it still hurts like hell, especially now. Beslan and the murder of Politkovskaya weren't part of the narrative in 2002 - these events belong to the recycled versions of the story.