Yushchenko was supposed to distribute Holy Fire near St. Sophia's tonight, but the ceremony got postponed - allegedly because the delegation delivering the Fire from Jerusalem to Ukraine (headed by Yushchenko's brother, as far as I remember) was running late (RUS).

If it's not Yushchenko himself who's being late, then it's his brother.

Yanukovych was supposed to speak at Maidan in the early afternoon, but changed his mind abruptly, somewhere around European Square, and left for what had at first been reported as some very important, very urgent negotiations that could solve the conflict, etc. - but in the end it turned out to be a mere football game (RUS) in Donetsk, Shakhtar vs Vorskla (Poltava), 2:1.

Speaking of Poltava, Mishah and I were passing that restaurant on Khreshchatyk that used to be Pora's headquarters (or press center?) during the Orange Revolution - Chateau - and he stopped to take a picture of the neat tables that they have outside - because, you know, this is, like, a hundred meters away from Maidan, where the biggest political crisis in the former Soviet Union is currently taking place... 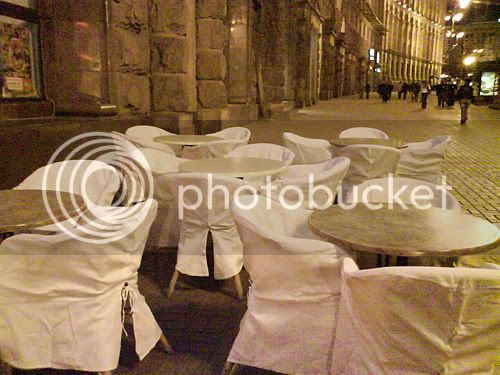 And the only reason the tables are empty is because it's kind of cold outside - not because it's dangerous or something.

Yes, but speaking of Poltava, we passed an ordinary Ukrainian family - mama, papa and their son, 8 years old or so - near this restaurant, and we overheard a tiny bit of their conversation: the boy, obviously, wanted to go inside for, perhaps, ice cream - and his mother explained the reason they couldn't go in - very loudly, in a beautiful Ukrainian:

"Because in Poltava life is a lot cheaper!"

Speaking of Pora (the party), it looks like they've split into two (once again, sort of) - and it looks like a bunch of Kaskiv's former allies are accusing him of sending some thugs over to Pora's office. Pictures of the damage are at Obozrevatel (UKR).

Another very telling quote that we eavesdropped on as we walked by the Pochtampt building at Maidan, of the "East and West together" variety: a bunch of guys - of what seemed like every age and every political view possible - stood there in a circle, discussing politics.

"But in principle, we are all alike," one of the men said in Ukrainian.