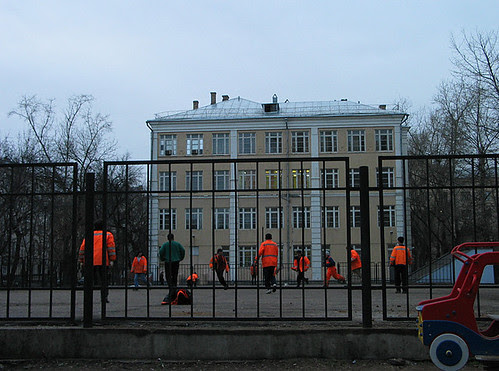 I took this picture around 6 p.m. today (yesterday): a bunch of street-sweepers (also, ice-breakers in winter) are playing football at a school playground. It was very fun to watch them: they were totally immersed in the game, didn't even notice that I was photographing them.

Most, if not all, were Asian (non-Slavic) - most likely imported into Moscow from a Russian region (not from the "near abroad").

Reading some people's blogs (mine included), you'd think all that ever happens to these "foreign migrant workers" is they get beaten and killed by ethnic Russians. Reading other people's blogs, it seems that all they ever do here is abuse and humiliate ethnic Russians. But life is more complex than that, of course.

The school near which they are playing, by the way, is named after a WWII "Hero of the Soviet Union" with a Georgian last name (which I don't remember).