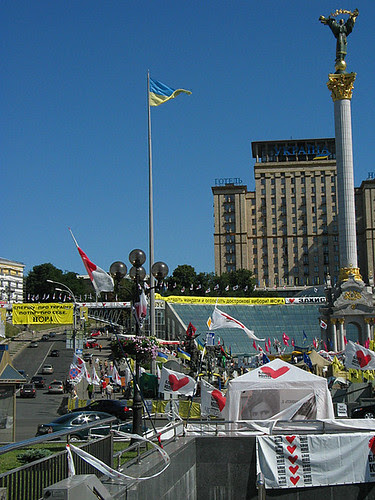 Oh, and yes, I did a quick run to the city yesterday (Kyiv's center, I mean), after almost a month and a half of living in Pushcha Vodytsya.

Leaving Marta was scary and weird; Kyiv's air isn't as bad as I feared, unless you're driving through the industrial district somewhere in Obolon; Maidan is sleepy, but let it stay there, maybe it'll prove useful; I rode back in a super cool black Mercedes, talking about kids with a sweet, Prima-smoking driver (professional driver, that is, not the car's owner), father of two daughters, aged 27 and 17, who, thanks to me, wasn't only making some extra cash, but also had a chance to revisit Pushcha, which he loved.

I'm posting a few more Maidanchyk pictures here. (The term 'Maidanchyk' is borrowed from a friend - and transliterated from Ukrainian, not Russian.)