While I'm at it, here's a link to another New York Times Ukraine piece - about the Sed'moy Kilometr market outside Odesa - From Soviet-Era Flea Market to a Giant Makeshift Mall:

Jeans for $9. Turkish suits, marginally stylish, for $60. Dior, Chanel and Armani are all a steal, if one harbors no complexes about authenticity. Speaking of complexes, there are no dressing rooms in shipping containers. Modesty, though, is in short supply, unlike anything else here, and men and women strip unabashedly in search of a proper fit.

It now sprawls over 170 acres. The largest shopping center in the United States, the Mall of America in Bloomington, Minn., covers 96 acres, though all comparisons end there.

The market is part third-world bazaar, part post-Soviet Wal-Mart, a place of unadulterated and largely unregulated capitalism where certain questions — about salaries, rents, taxes or last names — are generally met with suspicion.

The piece mentions that the 7th km market has a website - http://www.7km.net/ - so I went there and downloaded the market's map: 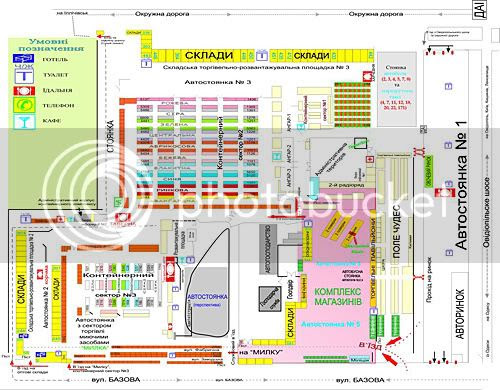 By the way - all stories and stuff from our part of the world are now stored conveniently in Russia and the Former Soviet Union theme corner of the New York Times - here.