We walked down Lyuteranska to Khreshchatyk today (yesterday) and saw something we really wished weren't there: the tall, ornate, wrought-iron fence preventing vehicles and pedestrians from passing through Bankova, the street housing the presidential administration.

I went over to the police checkpoint on one side of the fence and asked the cops if it was possible to walk through to Instytutska (no) and whether the fence was there for good (yes).

We'd read about the fence, but hoped it'd be temporary: after all, it was making the lives of the people living nearby a nightmare, forcing those who had to use the subway to walk a few extra miles, to bypass the fenced off street.

It has also made the Chimeras House, one of Kyiv's nicest landmarks, off-limits to everyone.

In summer 1996, it was still possible to walk freely on Bankova - and not just on the sidewalk, for I remember photographing a friend of mine next to the huge 'President of Ukraine' sign at the administration's main entrance: no one said a word to us then. Later, they put up a relatively low fence along the sidewalk, making the walking area really narrow, though a bigger problem was that one could no longer admire the Chimeras House adequately: because of the fence, there was no way to make a few steps back, off the sidewalk, for a better perspective.

When the protests at Maidan began last year, it took Kuchma's people a few days to come up with an idea to block off Bankova completely and install dozens of riot police there. And that backfired, of course - for only the tyrants are erecting walls; the truly good guys are tearing them down.

After Yushchenko's victory, Bankova lasted a few months without a fence, and people used to come over to rally, or to catch a glimpse of their heroes as they were leaving the administration building.

It must've been pretty noisy, not unlike the Orange Revolution, so Yushchenko's people decided it was time to replace the asphalt on Bankova - which couldn't have been damaged in any major or minor way, since very few cars had driven over it during Kuchma's second term.

If nothing else, the repairs were a wonderful excuse for restoring the fence on Bankova.

It was too dark to take pictures of the fence today, but I will soon - both from Lyuteranska and Instytutska.

At some point, I walked up from Maidan to the Kuchma Administration building tonight. It's located within a five-minute walk from Maidan, and yet, it feels like a different world there. Quiet - as if the neighborhood is soundproof. You wouldn't guess anything's going on at Maidan if you're based there, not even when something of this scale is taking place - a few hundred thousand people rallying, in addition to a concert...

So I decided to take a picture of the administration building - it's fenced off (always, not just now), and there was some guy standing next to the entrance, and when I pointed the camera toward him, he ordered - yes, ordered - me not to photograph there. I got a blurry picture, regardless - but that's not the point. The point is, who the fuck is he to tell me, in Russian, what to do. I'm wearing some orange, of course, so there was some logic to his behavior, considering who he's with, but still...

Very close to the administration, there were two buses with commando-looking men in them, all dressed the same, in dark-blue jackets, brand new, with neat black collars made of artificial black fur, and in black military boots. They looked quite menacing, even though they didn't say a word to me, as I passed by, on my own and wearing orange. Those guys definitely represented some kind of special forces, but they didn't carry any distinguishing marks on their clothes, nor did they have any weapons visible. They just looked weirdly out of place so close to where hundreds of thousands peaceful people were demanding a fair election and listening to cool music. They weren't some thugs brought here to riot, they were probably there to guard Kuchma from the crowd, in case something went wrong - but the look of them was still disconcerting. And that guy's obnoxious order not to take pictures just reinforced this feeling.

Here's the picture of the obnoxious guy: 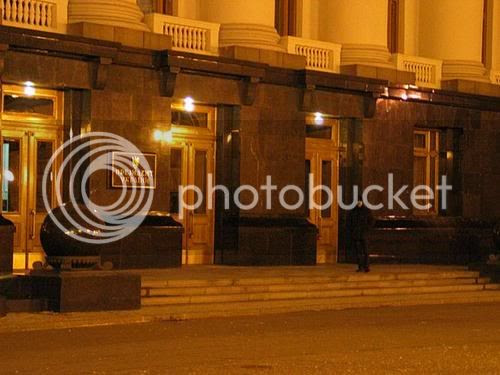