Walked to Maidan and back, got somewhat too tired - I'm not who I was last year, obviously, and the weather's pretty lousy, too - 31 photos...

At Maidan, there was a Natalya Vitrenko/Progressive Socialist Party freak show. 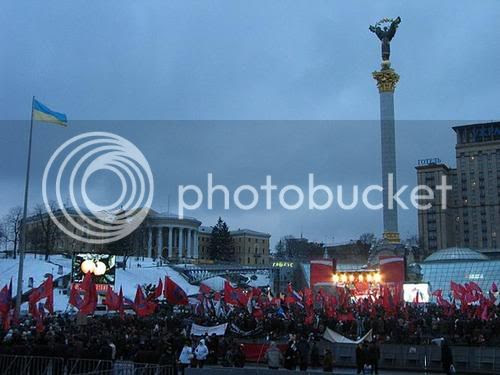 Lots of people, not only from Kyiv but from other places as well, with various flags, posters and banners, including a couple Russian flags. Vitrenko's speech was full of hatred, her rhetoric so familiar, so similar to the one most popular in Russia at many levels now: paranoia, everyone's out to get us, the poor little Orthodox Christians, especially those evil Americans, and those evil orange ones. 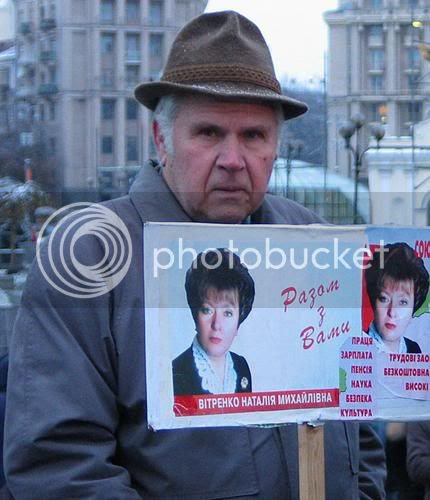 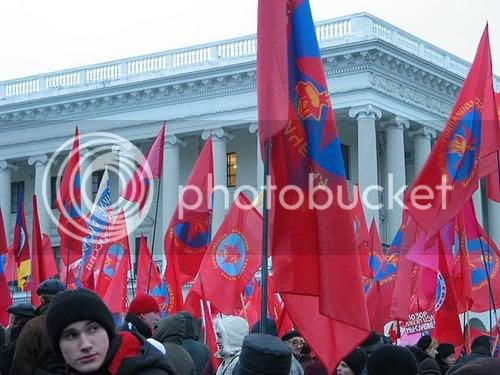 Vitrenko's such a liar, too - claimed to have nearly been killed by the orange crowd last year, but the brave coal miners rescued her; okay, but now, of course, she didn't give Yushchenko any credit for letting her hold this circus at the country's main square, where anyone was free to join her if they felt like it. Back in 1999, when Vitrenko ran for president herself, she promised to shut down all international airports if she won.

The crowd didn't look anything special: a fair number of men looking and smelling like they drank too much last night and smoke too much in general; a fair number of middle-aged, not too friendly-looking women; some young people with red stars on their jackets and the word 'Breakthrough' (proryv) typed on their scarves. Despite their lack of charm, though, most weren't as hysterically hostile as their leader - as long as you avoided talking politics with them, I guess.

One woman told her friend to strike a pose when she noticed I was photographing them, and they both sort of smiled back at me when I sort of smiled at them. A man with Vitrenko's party flag asked me to take a picture of him - 'for history.' He gave me his address then, in Dnipropetrovsk, and asked me to mail him the print. 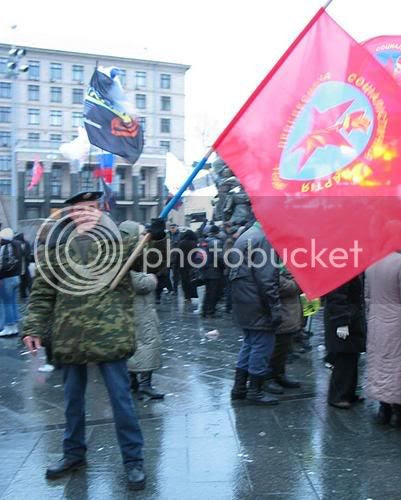 It reminded me of this guy at the May 9 freak show in Moscow: 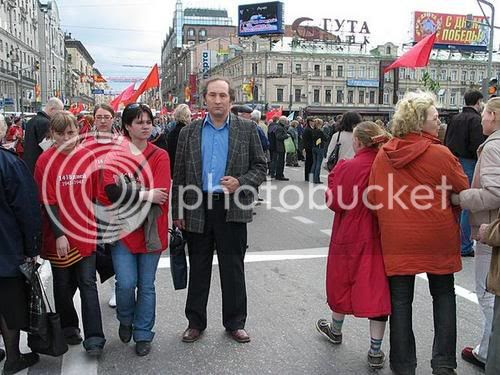 He was from Omsk, staying with his friends outside Moscow; that day, he was in such a hurry to catch his commuter train that he left his camera at his friends' place; he was the only person at that gathering I grew to have any feelings for, even though he didn't conceal he was a Communist; 'I'm a decent person [poryadochnyi chelovek],' he told me, and part of me knew he wasn't lying; he also said he was an offspring of Ivan Annenkov, a Decembrist; I still feel very guilty for losing the piece of paper with his address and never sending him the picture.

Today's guy said he was a former marine, and I thought it must've been a long, long time ago, for he was so skinny now; I told him I could only promise to try sending him the picture - but I couldn't promise I'd actually send it, because of my pregnancy; he wished me to have a very healthy baby, and I thanked him; he then tried to talk to me about some esoteric shit, hypnosis or something, and I escaped, telling him I could no longer stand his cigarette next to my face.

One of today's slogans on Vitrenko's side was 'The fascist won't get through!' (Fashist ne proidyot!'] - and I found it so silly at first, so irrelevant.

But then I crossed the street to the other side of Maidan, where there was a bunch of UNA-UNSO guys. They were singing some military songs, and on finishing one of them, they shot their right arms up and forward, unbent, several times - a gesture resembling the notorious Nazi one just way too much...

A good thing about this UNA-UNSO group was that, unlike Vitrenko's crowd, they weren't numerous at all. 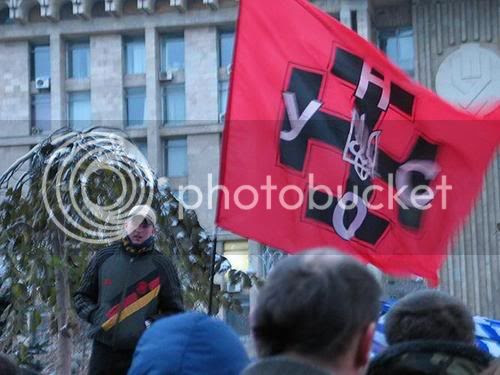 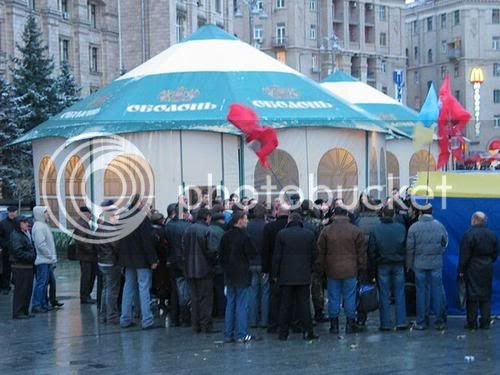