Part of this entry could've appeared around 5 a.m. yesterday, when I woke up after just a few hours of sleep, sweating as if I were in a sauna, not a hospital room.

I was so mad and so unhappy - but, fortunately, I'm trained to use my Dear Diary in cases like this, so I've avoided spilling it all on innocent people. After a cool shower and a few pages of some extremely angry writing, I managed to fall asleep again.

In the morning, I told the nurses that I'm either leaving soon, or they find me a fan. They moved me to another room instead.

The air's cool here and I am feeling perfect.

The most frustrating thing about these two days was that I constantly focused on myself, was preoccupied with all these thoughts about bad luck and the goddamn dry air - and had neither time, nor energy to think some wonderful, positive thoughts about the baby and my pregnancy in general.

The torture of the past two days wasn't unexpected; I knew something like this would happen to me at this fancy-schmancy hospital - I've known it since last Friday, when we spent the night on a Moscow-Kyiv train, as fancy-schmancy and costly.

The train is new, has been running since August, and makes it to Kyiv in nine hours or so, not 12. When they were reconstructing the tracks for it in July, all the trains on this route were running late, including the one we took to get to our own wedding: we arrived in Kyiv two hours late and just three hours before we were due at the wedding office. We had a two-bunk compartment, SV, so there was no way for poor Mishah to escape my fury...

This time we also had an SV compartment, to avoid having some fat person (or two) cough or snore on me all night.

Inside, the new train looks different from other trains in this part of the world: its walls are made of beige plastic, very cheerful; the WCs are clean, wide (which is really important to me now), and you can use them anytime, not just when the train's moving. Way cool.

But when we lifted the bunks to put our stuff there, we saw a midsize cardboard box under one of them. We knew right away that the provodnitsa was making extra cash this way, working as a parcel carrier. It happens all the time, and we send stuff this way ourselves sometimes. So, normally, I don't mind having something not my own underneath the bunk - but pregnancy has made me more paranoid: the train's crossing two borders, and who knows what's in that box and whether the border control or customs guy would believe it doesn't belong to us. Also, for the money we've paid for the tickets, it'd be nice of the provodnitsa to warn us she's using our compartment or, even better, ask our permission. Mishah walked over to her to ask what was inside the box, and she was somewhat jumpy, realizing probably that she'd done something inappropriate; she said there were envelopes or something like that in the box, and we let it stay.

Next, we learned that the lock on our door was broken. Having been robbed on a train once (and almost robbed another time), I didn't like it at all, even though this train had a fancy alarm system that sounded off if someone opened the door. My paranoia told me that the provodnitsa could conspire with the bad guys and turn off the alarm, to clear the way for them. But then I had to use the bathroom every 20 minutes for half the night, so even if she had some evil plans, she must've reconsidered, as I was obviously awake.

The real torture came when I decided to finally fall asleep. As it often happens on trains, some tiny, insignificant detail must've gotten unscrewed in a totally unreachable part of the compartment, and as soon as the train gained speed, it began making loud noises. Boom boom boom all night, except for the time the train slowed down or stopped. And no way to escape the noise. Not all trains have this problem, and most new ones are very quiet - but I spent two years on, predominantly, old ones and learned to go crazy from this sound the moment I detected it. To buy an expensive ticket, expecting comfort and all, and then to spend the night sleepless and seized by some of the old nightmares - it's more than just disappointing.

As if this wasn't enough, we also had problems with the Russian border control - but that's irrelevant and completely our own fault. (Briefly, I stayed a couple weeks more than the three months I'm allowed to in Russia, allowing the border control guy to make some $35 on us. Nothing serious, but it added up to my insomnia, so I started to weep at some point, as Mishah went out to pay the fine (if you can call it that). The provodnitsa came over and tried to soothe me, saying, "Stop, stop, or, God forbid, you'll have your baby right here.")

In the morning, I told Mishah there was no way I was going to the hospital I'm at right now: because we'd pay them all this money, and everything would be way cool, until one loud Soviet bitch shows up - just one, that's more than enough - and spoils it all for us. Just like that loose part of the train. This is how we got ourselves into the roddom 6 and 7 situation.

The loud Soviet bitch at this place turned out to be the screwed-up air conditioning in my room. I managed to get away from Moscow's horrible air and ended up in a room with no air at all.

I hope so much that it'll all go smoothly from now on...

Had another walk around the neighborhood - 25 photos. 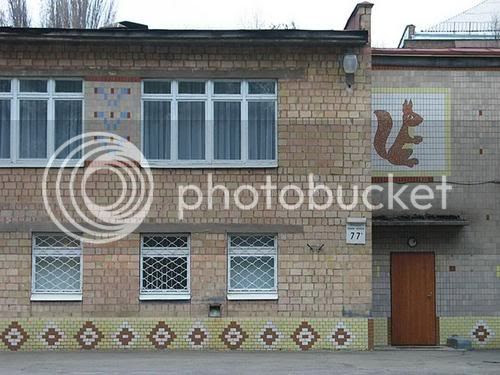 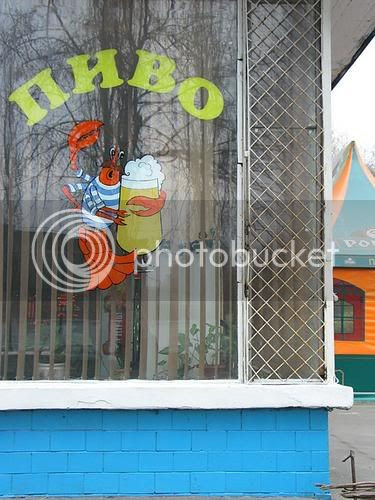 I feel a little like Tarkovsky's Stalker during these walks: the place is so unfamiliar; no one walks around with a camera here; who knows whether I'll encounter any of the traps; but the traps are definitely out there, all over the place. Actually, the morgue guy was one, and today I stepped into dog shit as I was about to take a picture of the misspelled word 'cannabis' - connabis - scrawled on a kindergarten gazebo...

I am, of course, a comic variation of Stalker: my pants keep sliding off my belly and I absolutely have to pause and pull them up every three minutes or so...