So... According to today's statement by Roman Zvarych (in Ukrainian), the minister of justice has a bachelor's degree in an undisclosed discipline from Manhattan College and has also taken classes at Columbia University's School of International [& Public] Affairs and at Ukrainian Free University in Munich. Zvarych claims that the education he received at Columbia and in Munich "equals" a master's degree, and that he was planning to write a Ph.D. dissertation on Plato's ethics.

I'm still pretty confused about it all - and the fact that Zvarych has refused to show his education certificates and other documents to the media isn't making it easier.

But the way the media are covering the scandal is kind of funny, too: someone at a place called Obkom wrote that Zvarych had received his legal education from a Californian academy that didn't give out info on its alumni. 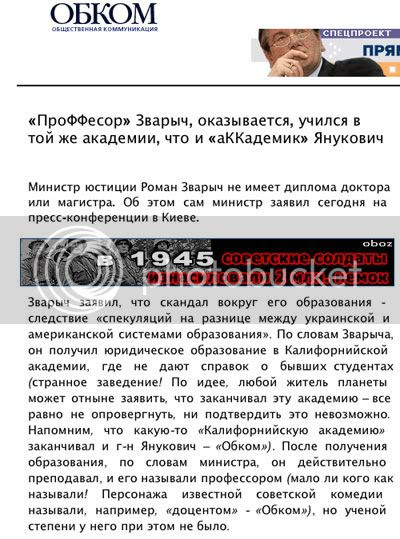 That's bullshit because, first, Zvarych did admit to having no legal education, and, second, he hasn't mentioned any West Coast institutions in his statement. Still, it must've been very tempting to allude to "proFFessor" Yanukovych once again (Yanukovych claimed to have a degree from some fake "Californian academy"), and so the guys probably decided to change Columbia to California. (Similarly, I once saw Madeleine Albright renamed into Margaret by a Ukrainian paper - in order to make the comparison to the Iron Lady Margaret Thatcher more striking, I guess...)

It wouldn't have been a big deal, though, if only Channel 5 - "The Channel of Honest News" - hadn't picked up this piece of misinformation and posted it on its website. They are too serious, of course, to make silly jokes about Yanukovych, too professional and straightforward - hence, simply a "Californian academy", with no parallels or allusions. They took the piece off the site later, before I had time to make a screenshot - but here's the same item from Channel 5's livejournal page: 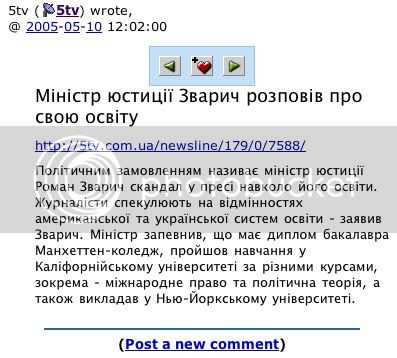