A story in The New York Times from three days ago - "For Some Beslan Families, Hope Itself Dies Agonizingly" (by SETH MYDANS, published Sept. 17, 2004) - too horrible, too painful to read:

This is not a nation whose government responds to the outcries of the bereaved, and they have been left on their own like the survivors and families in past disasters in Russia.

They plead with one official after another for help; they search hospitals in distant cities; they pick through bits and pieces of bone and flesh and teeth that have been set aside at the morgue like trays of party favors.

This photo (by James Hill for The New York Times) accompanies the story: 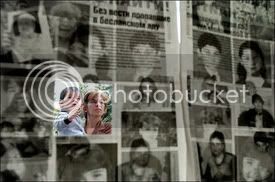 Caption: A mother and her child Thursday examined the pictures of victims of the Beslan school siege not yet identified or found. A picture was removed after one victim was found, though whether dead or alive is not known.

In today's story, "In Ethnic Tinderbox, Fear of Revenge for School Killings," Seth Mydans reports from an Ingush-populated town of Kartsa that "[b]oth here and in Beslan, people are talking about Oct. 13, the end of a 40-day mourning period, when the traditional moment comes to contemplate revenge."